Seduced by a Wooly Bugger 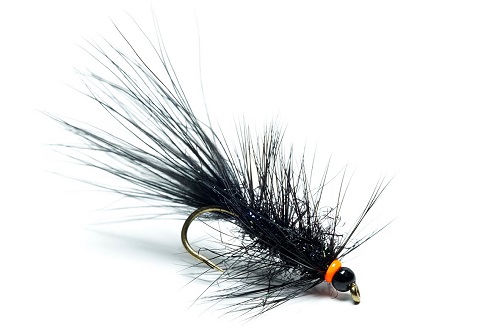 No matter where your home fishing waters might be, springtime angling is always a challenging time of year to get your fix. While the warm, sunny days keep the creeks and rivers flooded with snowmelt at almost unrecognizable levels, the cool night temperatures keep the waters frigid, making runoff-weary fish even more lethargic and less willing to play the game. Routine tactics that seem surefire in the late summer months don’t always deliver in the spring, forcing you to engage in fringe activities to catch fish. Nonetheless, we flyfishermen are a stubborn bunch, and when those bright spring days start falling in line, our inborn fish-stalking instincts start tugging at our subconscious, telling us to find water, and find it soon.

When I started flyfishing many years ago, I was entranced by the obsessive study of insects that most hardcore flyfishermen took upon themselves to successfully “match the hatch” and select the appropriate fly for the given situation. This study, or “entomology,” involves the infinitely complex memorization of hundreds of different Latin names, each corresponding to specific insects, at specific stages in their life, under the water, on the water, and in the air.

Years ago, I set out on an early spring fishing trip armed with my usual arsenal of insect-specific flies. Having mastered the most elementary levels of entomology, I was certain I was going to have a successful day. Arriving at the river and staring out at the turbulent mass of water moving in front of me, I looked at my fly box and had absolutely no clue where to begin. Nothing was hatching, no surface activity, and the water clarity was so muddied that the idea of finding any clues seemed downright impossible. I threw practically everything in my fly box that day, casting for hours, both topwater and subsurface. Nothing I tried could yield so much as a single bite.

Sitting streamside in the late afternoon, with my head hung in defeat, I opened my box one last time, looking for some sort of eureka moment. And then my eyes fell upon it. Segregated in the farthest corner was a big black Wooly Bugger saying “ME! ME! ME!” I paused for a moment as I looked it over. This was a fly that had been given to me. It was certainly not a fly that I had ever considered using, given that it was not an insect imitation. And after all, wasn’t insect imitation what us lofty flyfishermen were all about? But it kept calling to me from the box like Darth Vader to Luke.

“Oh, to hell with it,” I thought as I tied it quickly to the end of my leader. Cinching down the knot, I couldn’t help but think that I was somehow cheating. This was a bait-fish imitation, practically a lure, almost a worm! “Do I really want to be one of those fringe guys who fishes Wooly Buggers?” I mumbled as started my windup for the first swing, hoping that nobody was watching. Splunking it down 30 feet upstream, I began a feverish retrieval, throwing a few rod-twitches in for good measure. Then, 10 feet from where I stood, BAM! Something big slammed the fly and took off with it downstream, ripping 20 feet of line off my reel in seconds. Ten minutes later, I landed and released a fat, healthy spring cutthroat, one of many that afternoon seduced by the power of the dark side.

I came away with a newfound respect for that fly and the tactics that make it unique. My current fly box now has an array of several colors and sizes of Wooly Buggers, harmoniously integrated among the other flies. Bugger, or “streamer” fishing may not be as glamorous as traditional topwater, insect-oriented flyfishing, but there is no doubt that in the toughest conditions, a well-placed Bugger is irresistible to almost any fish in any water. Fish hit this fly hard, especially when it’s retrieved quickly. Fishing a streamer is not that different from fishing lures. The same principals apply, except you’re using a hand retrieve as opposed to the reel retrieve used on spinning rods.

Sometimes it’s less about the number of fish and more about how the fish were caught. There is no right or wrong way to fish; it’s just about what makes you happy – so long as it’s within the confines of the regulations. I am still more inclined to use my entomology knowledge when flyfishing, but on that particular day, I just needed to catch a fish. And the Wooly Bugger delivered. //