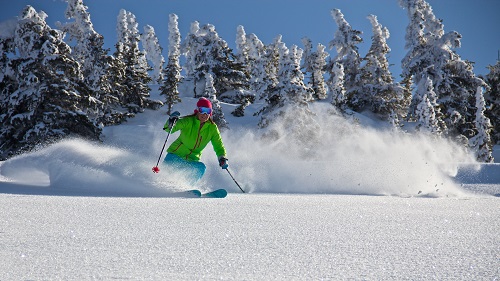 Last season was one of historic snow-drought proportion, and we put lots of miles on the rig because for a snow junkie like myself and my skiing posse, we go where there’s snow! With our local resorts closed by the end of March, and with the need for one more fix, we decided to head north. Nestled between the Selkirks, Monashees and Purcell mountain ranges lies the historic railroad town of Revelstoke, British Columbia. This zone is known to get 40-60 feet of snow annually, and it’s usually a pretty safe bet for getting a powder fix.

Revelstoke Mountain Resort, or RMR as the locals call it, was the reason we made the trip. RMR is one of the newest ski resorts in North America, and it gets hammered with consistent, deep snowfall. Because of this, it attracts plenty of big names in the ski world, many of whom have made Revy their year-round home base. A 7-hour drive from Spokane, the trip is filled with plenty of scenic beauty along the way, including the gorgeous 20-minute ferry ride across Arrow Lake.

We pulled in to Revy about dinner time and did a quick check-in at the Sutton Place Hotel, a ski-in/ski-out hotel at the base of the resort, before heading into town. After seven hours in a car with my good friends Desiree Leipham and Tommy Frey, I’m in dire need of a cold one and some pizza at the legendary Village Idiot pizza joint. With ski and snowboard movies playing nonstop on the numerous TV’s, plenty of local brews from Mt. Begbie Brewing and incredible pizza, it’s no wonder this is the locals’ hangout. 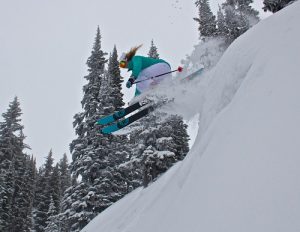 The next day, we start off under greybird skies, and since the resort hasn’t received any fresh snow in the past week, we break out the groomer skis and set out for some high-speed cruising and big vert. RMR is a huge mountain and with over 5,600 feet of leg-crushing vertical and 3,100 skiable acres, you’re in for some big days. Accessing the goods at RMR is easy with a gondola and several high-speed lifts.

We did some exploring and ventured into the North Bowl for a few runs. This is the zone where the Freeride World Tour holds its freeskiing event each season. According to many of the competitors, this is one of the better venues with plenty of challenging lines, steeps and a consistent snowpack. The North Bowl careens you down to the Ripper Chair, where we lapped a few cruisers on groomers like Burndown and Chopper.

For lunch we slipped back over to the Mackenzie Outpost on the front side. The Outpost was pretty easy to find as we let our noses guide us to the smell of gourmet burgers and chicken being barbequed on an outdoor grill. The sun started breaking out about then, so we enjoyed our burgers on the deck overlooking the Revelstoke Valley. With snowfall forecasted to start that evening, we decided to have dinner at RMR’s Rockford Grill, a casual wok- and grill-style restaurant.

The next morning, we woke to 10 inches of fresh on the ground with snow still falling. Not bad for an April day. We loaded up with coffees and croissants at La Baguette on the way to the gondola and then made a beeline for the Stoke Chair, where we were greeted to some heavy fog at the top of the mountain. Being from the Inland Northwest, we are used to it. Fortunately, we had a fairly decent lay of the land locked into memory from the day before, and we hit Jalapeno where there are trees on both sides of the run and plenty of sweet stashes on the edges. We lapped this area several times that morning.

Later that afternoon we met up with long-time friend and Revy local Ron Sahlstrom and his crew, and they invited us to their end-of-season tailgate party. We met plenty of characters from this die-hard, get-after-it group! Many of them moved to Revy back in the day when the original ski resort, Powder Springs, was still there. 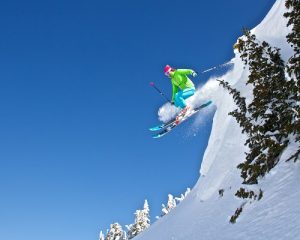 Our third morning was a pleasant surprise, with blue skies and cold temps. Being lucky enough to have been staying right at the base of the gondola, we were some of the first riders in line to get in some of the untouched powder that wasn’t visible the previous day. We made it to the top of the Stoke Chair where they had just dropped the rope on hiking the sub-peak to the Nipple directly above the chair. We took turns breaking trail up the bootpack, and it didn’t take long before we had a line of 10-15 other skiers and boarders following suit. The Nipple is a short 20-minute bootpack to the sub-peak where you can access several options like wide-open powder runs on the front side or steep, North Bowl chutes.

We ripped our first run down back towards the Stoke Chair where the untouched was incredible. The cold temps from the night before had sucked the moisture out of the snowpack, making each turn blower like. Everyone who made the hike had sweet rewards on the way down, and with all the hooting and hollering, it didn’t take long before there was a steady flow of hikers wanting in on the action. Wow, what a way to start off a Sunday. By 10:30 a.m., we had banged out some of the better runs of the season, working up a big sweat, some tired legs and huge smiles in the process.

We slid back down to the base for one final run of the ski season. As we rode the chair back up, we reflected on how much fun we all had throughout the season, even with the tough conditions. Skiing is skiing. You take what you get and have fun with it. That’s skiing! // (By Bob Legasa)