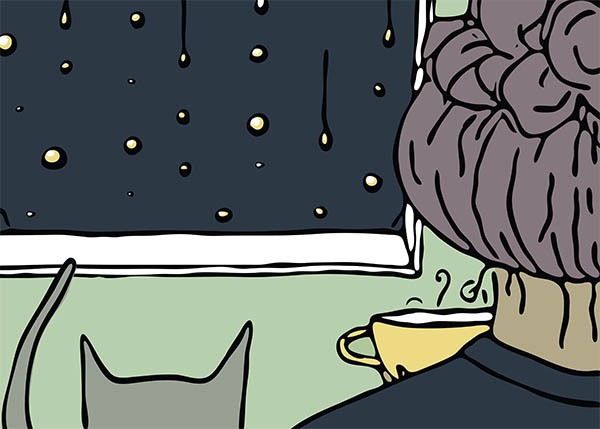 When the characters on Game of Thrones speak their ominous mantra, “Winter is coming,” Spokanites totally get it. Local anxiety over the shortening days slips its way into weather talk each year well before the first crimson leaf hits the ground. This year, before the winter-weary even had a chance to shop sales on light boxes and vitamin D supplements, a group of psychologists from Auburn University at Montgomery released a study questioning the very existence of Seasonal Affective Disorder, aptly abbreviated as SAD. No matter how the researchers analyzed annual survey data from the Centers for Disease Control, they couldn’t find any link between shorter days and increases in self-reported symptoms of serious depression.

Seasonal depression due to lack of sunlight sure seems real to those suffering from depression during the wintertime. And of course, depression remains real regardless of the season, so get medical help if it feels like it’s time. Those simply anxious about how the early sunsets may affect their mood might feel less stressed knowing that the season isn’t cursed. Perhaps simply losing that anxiety will do the trick to stave off sadness. Virtually all home remedies for the winter blues double as routine mental health maintenance, so they’re worth keeping around whether or not the winter blues come calling.

Get Your Vitamin D

Low levels of vitamin D have been linked to depression, and the body produces less vitamin D when exposed to less sunlight. Take a daily supplement to protect against deficiency. The National Institutes of Health’s daily recommendation for vitamin D intake assumes low sun exposure, so just the normal dose should do. Don’t just leave it to the Gummy-Vites, though. It’s still worth getting outdoors during the daytime to get fresh air and remember what natural light looks like, especially if driving or riding home from work in the dark grinds your gears.

In case of mood emergency, go for a run. Exercise may be the fastest way to improve a crappy mood — and it’s shown to help alleviate long-term depression. Though it’s not totally clear why exercise works so well to manage mood disorders, it has been shown to alter brain chemistry. If running in the snow or biking through slush feels too awful to bear, move the party indoors with a living room yoga session or quick trip to the gym.

Light therapy, often recommended for sufferers of SAD and increasingly for nonseasonal depression, entails sitting near a bright light for half an hour per day. Light boxes made for this purpose shine a hundred times brighter than normal indoor lighting. A 2015 Canadian study of 122 patients showed light therapy to be more effective than Prozac for treating depression. Light therapy lamps range greatly in price and aren’t regulated by the FDA, so talk to a doctor if you’re considering buying one to deal with depression.

Holidays may be a great excuse to eat more junk food and drink more alcohol, but those choices impact more than the waistline. Alcohol and caffeine both lower serotonin levels and increase anxiety. Sugar, in particular, is thought to exacerbate mood disorder symptoms. It’s possible that those holiday celebrations are leaving you less jolly because of science. Instead of eating mostly healthy with the occasional indulgent slice of pie, it’s just all pie, all the time. Rather than make a doomed attempt at the healthiest holiday season ever, aim for something in the ballpark of balance.

Make a mental list of people who rock at acknowledging your feelings. If you’re not sure you’re okay — or you know you’re not — a good friend can help you figure out the next step to take, whether it’s schlepping yourself to the gym or getting medical help. //

Erika Prins Simonds writes our Everyday Cyclist column. She also wrote about in-town ideas for staying active during the winter months in October. Find more of her writing at erikaprins.com.