Parkour // Recess for Grownups and Kids

Straight though it may be, the shortest distance between two points isn’t always flat or easily navigable. Most people would avoid a wall, boulder, or railing by walking around it. But, argue the growing community of worldwide parkour enthusiasts, where’s the fun in that? Parkour is an activity that challenges practitioners to keep going straight forward, tackling obstacles presented by the urban jungle rather than avoiding them. And, perhaps, throwing in a back flip for extra style points.

Twenty-four-year-old graphic designer Josh Blakely learned parkour the old-fashioned way: by just going out and trying the moves he saw pros doing in YouTube videos. He started practicing in his high school wrestling room. With friends, he’d head to the park and use picnic tables, cement walls, or whatever else was out there as training equipment. Thanks to guys like Blakely, newcomers can now take classes in parkour at Inland Northwest gymnastics centers, safely learning the basics before advancing to the coveted mid-air somersaults.

Spokane Gymnastics offers classes for kids and adults and boasts an 800-square-foot indoor parkour room filled with obstacles. At Avant Coeur Gymnastics in Coeur d’Alene, where Blakely coaches, students age 6 through 22 advance through three skill-based class levels by practicing in its parkour room and making creative use of the regular gymnastics equipment. Blakely officially began coaching in 2010, though he’d begun volunteering at the gym two years prior at 16 years old. Like him, most kids come in itching to do flips like they’ve seen the pros do. So he teaches them to somersault on the floor.

“You start them out by learning things on the ground,” he says. “If you can’t do things on the ground then you shouldn’t be doing them in the air.” When they’re ready, students can elect to compete in regional and even national competitions. Avant Coeur Gymnastics has hosted several competitions in recent years. Most often, Blakely’s students travel to Missoula, which has its own rich parkour scene, to compete. 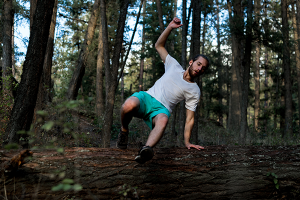 But the real thrill comes from taking new skills out into the world — and that’s where things get tricky. Great parkour locations might have lots of walls of varied heights, railings, and perhaps some things to hang from, like a sturdy bar. More importantly, they’re places where getting rambunctious is explicitly allowed or at the very least, they have a history of tolerating parkour.

Even in public spaces where unleashing acrobatics on an unsuspecting wall or railing is perfectly legal, reactions can be mixed. “I tell kids that they can go to the local parks and typically won’t be harassed by anyone,” Blakely says. “However, doing parkour, you pretty much always get looked at in awe or you get looked at like you’re the weirdo.”

Blakely’s favorite spot to train is Fort Sherman Playground in Coeur d’Alene City Park. With castle-like turrets and bridges, plus classic playground features like bars and slides, the playground couldn’t be more ideal for practicing parkour moves. But, it’s still a playground. “Parents just get enraged,” Blakely says. “They say, ‘You guys just can’t be here. You’re too big and you can’t play.”

It’s a big world with lots of places to practice, so Blakely errs on the side of respecting people’s requests (especially if they’re wearing a security guard uniform) in hopes of building good will for the future. Busier places can become less hostile to parkour practitioners (called “traceurs”) when they’re not being used by others — perhaps evenings and weekends for spots that are busy during the day, or weekdays during school hours for public parks that fill up with kids when school gets out.

Searching for new training spots may be just as much fun as practicing: Seeing the world as an obstacle course presents a whole new perspective of the city. For more information, visit Avant Coeur Gymnastics at cdagym.com and Spokane Gymnastics at spokanegymnastics.com. //

Erika Prins Simonds wrote about winter birding in January. Read more of her writing at erikaprins.com.