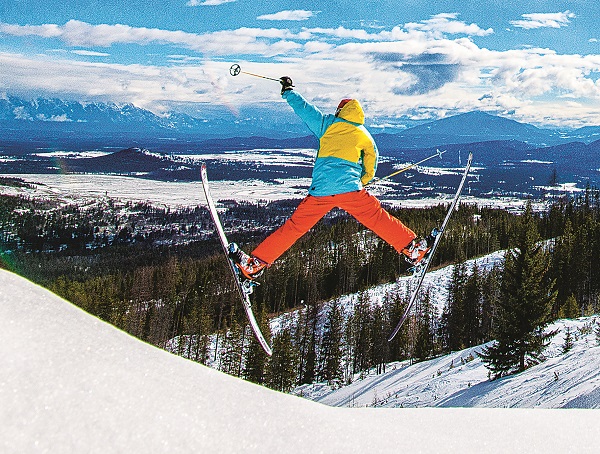 As an old-school ski racer who grew up with skinny skis, tight pants, and bad hair, I admit I am at a loss when it comes to the plethora of tricks the newer generation is throwing down. On several occasions I have watched in awe at some of the things these “kids” can do today. Shoot, even the language they use to describe their airborne acrobatics sounds like a foreign language. Want to utterly confuse any dude over 40? Ask them what a Zutnick, Lui Kang, or Skodeo are and watch them stutter and check out. As cool as it all may be, it’s important to remember that these tricks all evolved from a handful of basic, old-school ones. Here are three that no one who grew up on snow in the 1970’s and 80’s will ever forget, because we all tried them, with varying degrees of success.

The Daffy
Regarded as perhaps the most stylish of all of the old-school ski tricks, a well-executed Daffy requires the skier to extend one leg forward, and one leg back, while trying to keep 200-centimeter skis as vertical as possible. While this sounds easy enough, there is a higher level of commitment to pull it off than one would think. I knew many a good skier (including me), who chickened out right before full extension of the legs occurred, thus rendering the attempt feeble at best. Heckling from one’s skiing partners usually ensued immediately thereafter. Only a gifted few could make the Daffy look seemingly effortless, like they had always been able to do it.

The Helicopter
As the predecessor to the now famous 360, the Helicopter was the one trick everyone wanted to do, and it usually caused the most carnage when attempted and failed. Part of the reason for this was the sheer length and weight of the skis. Imagine launching yourself off a jump and attempting to twist your body in a full circle, all the while praying that when you land, you either stick it, or safely come out of your bindings. I once witnessed an unfortunate landing by a friend of mine that resulted in his bindings actually blowing apart. Despite the risks, every kid I knew wanted to successfully land a Helicopter.

The Spread Eagle
As the trick that everyone started with, it’s still the one that I see on the mountain today. From little kids to dudes in their sixties, the Spread Eagle is a ski trick staple that requires the least effort and risk. While airborne, simply spread your legs apart. Awesomeness is rated by how far you spread your legs, which is also where things can go wrong. Go too short, and you look like a poser. But go too far apart, and things will get messy if you don’t stick the landing. The cool thing about the Spread Eagle is that it’s the first trick we all tried as kids, and it’s even cooler still to see that it hasn’t changed in the last four decades.

There is no doubt that the moves performed by skiers and snowboarders in today’s terrain parks are amazing to witness and leave us wondering what crazy thing will happen next. But keep in mind where those insane tricks started. The came from a time when terrain parks were snow covered rocks and stumps, and you could count the number of possible tricks on one hand. //

Brad Northrup grew up skiing in Central Washington and has been a contributing writer for Out There since 2011. He writes the Ski Bum Advice column all winter long.