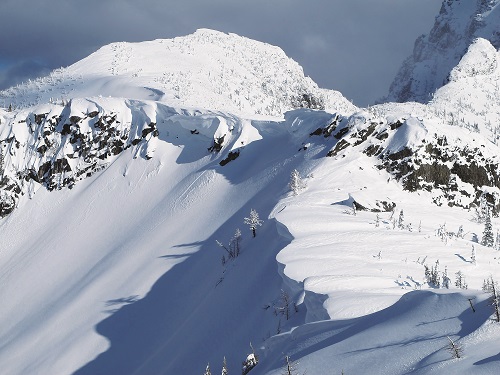 On February 22, Scott Coldiron and Christian Thompson climbed a fantastic new alpine ice route just below A Peak. The duo skied up to the north side of Snowshoe Peak via the Granite Lake drainage and started up a line of ice that Coldiron has been eager to climb for a couple years. They traced a route up the wall between A Peak and Snowshoe Peak, directly under the Blackwell Glacier.

The team named the route Black Well Falls (900′ WI5 M4) after the glacier, which feeds the climb from above, and the black well formed by the huge overhanging chimney towering above the climb.“To my knowledge, it’s the biggest steep, pure ice route in this little region,” Coldiron wrote on his Facebook page.

On March 7, over two weeks after completing Black Well Falls, Coldiron returned to climb a new line up the northeast face of A Peak. Coldiron teamed up with Jonah Job, Ben Erdmann and Beau Carrillo. The four climbers separated into two independent rope teams, climbing parallel lines until reaching the final crux pitch, led by Coldiron and followed by all three climbers. They named their route Unprotected Four-Play (AI4+ M6 R, 2,000′), because, as Coldiron joked, “God knows the climbing world needs another bad-pun route name.”

Coldiron’s description of the route would be enough to deter most climbers: “Hero sticks in neve and bomber alpine ice, punctuated by scary runouts and thin vertical ice…perhaps a moment of panic scratching through sugar snow over featureless rock.” Altogether, the route required everything he had, and it proved to be one of his most challenging climbs ever.

Even though the primary winter ice season is over, Coldiron is eager to explore more lines in the region next year. He admits the approaches are burly, but there’s a special reward for ice climbers willing to go a couple extra miles. Although the greatest factor for ice climbing is the conditions, Coldiron is already scheming about other possibilities in the multiple basins surrounding Snowshoe Peak, as well as other portions of the Cabinet Mountains. //