My Life as a Ski Racing Mom

“I had no idea what ski racing was!” says Carol Waldenberg, who spent seven years as a ski racing mom, committing substantial money and time to support her two daughters. “I put my daughter in the intro class and had no idea what the steps to racing were. If I could go back and do anything differently, I would have started her in the racing part of the program the second year instead of keeping her in intro for two years.”

Carol, who grew up skiing in Montana, knew that the ski team would allow her daughters to “meet others who love to ski” and help them to become advanced skiers. “Coaches are committed to the athletes. The value is worth it to start your family on the path of a sport for a lifetime,” she says.

But their success depended on her full commitment to the program. Carol lost sleep and lost weekends to the mountain, especially as her daughters got older and every Saturday and Sunday were committed to the team. But what she gained was quality time with her kids and a wealth of winter memories.

One time, they drove all the way up the mountain and realized they forgot one of the girl’s ski pants. Carol’s save-the-day solution: “We went over to the kids’ ski school and found some to borrow. They were too big, but I was happy to simply have some.”

She saw her daughters learn perseverance and mental fortitude. What might have been major drama was a lesson in personal resolve. For example, one daughter “peed her pants at the age of nine,” Carol says. “She was so determined to go right back up the mountain and continue her day. I thought it best to let her be…[she was] hard core. I was proud of her!”

As a single mother, the buck stopped with Carol every time – from gear checklists to snacks and transportation.

“The truth of my life is none of this would have happened if I didn’t risk to change my life, my career path. I worked for a pharmaceutical corporation for 16 years and traveled a lot. As a single mom, I chose to step away from [a career with] no time for freedom and made a choice of living a quality life with my daughters. My professional marketing career, representing the world’s largest nutritional company (Isagenix), has afforded me this independence,” she says.

“Let’s face it. Most families can’t invest the time and money to commit to the ski racing game. [Those who do] are the lucky ones – the ones with the finances to make it happen and the time to commit to taking their kids to the mountain.”

Carol didn’t encourage her daughters to start ski racing to become the next Lindsey Vonn. The greatest benefits were “seeing both my daughters create their own success…it’s different for all kids! And it gave me time to ski with adults,” she says.

Her advice to parents: “Be prepared for happy days and sad days. Remind kids that the opportunity for growth is individual and not to compare themselves against others. Youth ski racing gives parents the opportunity to give of their time and finances for many years if their kids want to excel and go for the big time!” 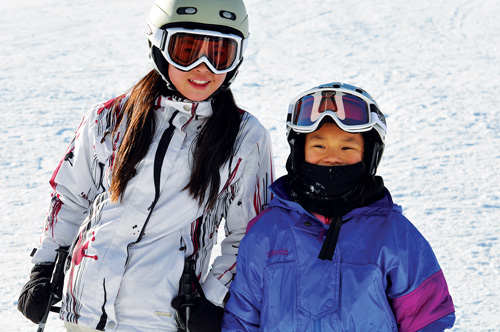 Help Clean Up Along the Spokane River

Be a Citizen Scientist at Waikiki Springs BioBlitz: May 22