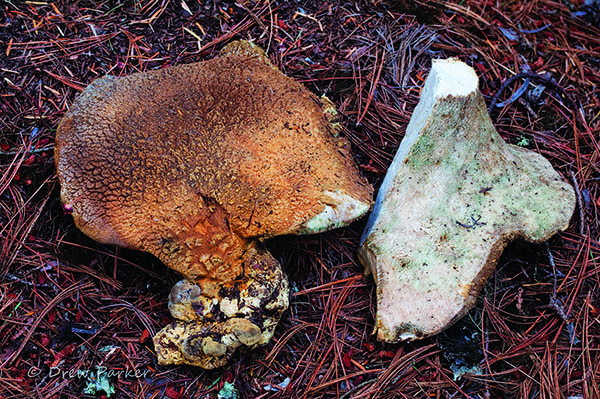 The Muppet mushroom is my name for Albatrellus ellisii, officially called greening goat’s foot. A title that would drive off all but the most daring from eating it. This is probably why, in my 25 years of studying fungi, no one had ever mentioned its edibility. David Arora, the author of “Mushrooms Demystified” and other renowned books, told me recently that A. ellisii was great if cut thin and cooked long. Which we did one night at my house, the result a woodland version of abalone.

The Muppet mushroom is on the top of my list of undiscovered delicacies in our region and most of the temperate world except for Italy and China where a close relative is eaten with gusto. It’s eminently identifiable amongst its peers with a shaggy, orange carpeted cap; pores that stain green after handling; a short, fat, off-center stem; and firmness. That said, a biologist from California confided to me the other day, “You cannot underestimate the foolishness of new mushroom hunters.” So, be sure of your identification.

The genus Albatrellus is considered a terrestrial polypore, sporting pores (little holes) underneath the cap instead of gills (blades). Most polypores grow on trees like a shelf, but Albatrellus grows on the ground. The other major terrestrial group with pores are boletes, the family that includes porcini. Those can be separated by their softer texture, central stem and pores that peel from the cap.

A restaurant owner asked the other day if I thought he could do a menu based on wild ingredients. It would be difficult, I told him, as foraging often requires precise timing, weather and being in the right spot. The Muppet is a perfect example of this. It’s not a mushroom you go hunting for. It’s one that finds you on a hike. It’s magic, and why I started “not hunting mushrooms” several years ago. “Not mushroom hunting” entails walking in the woods with no expectation and then miraculously finding mushrooms if they present themselves. It’s far more enjoyable than actual mushroom hunting, which is often anticlimactic. The last time I saw a Muppet was on Mount Spokane. They also show up around Sullivan Lake and various spots throughout the Idaho Panhandle.

A fascinating side note is phylogenetic research of fungi has shown many groups (genera) aren’t really a group at all, having evolved from different ancestors. Albatrellus is one of them. They share strong morphological features and growth habit and yet come from at least two totally different lineages of fungi, somehow converging on this distinct habit as a beneficial form of existence.

To prepare, cut thinly and sauté at a medium temperature for 30 minutes or more. Add water if it starts to dry out. Stick to salt, oil and maybe a little wine or sherry the first time cooking. Albatrellus has been shown to have unusually high levels of selenium, so take a break from Brazil nuts while munching on Muppets.

Cautionary Points:  Beware of any mushroom with orange or red pores on the bottom. Have your specimen checked by an expert the first time you collect it.

Culinary Attributes: Chewy in a delicious way. Subtle umami flavor. Can be kept fresh in the fridge for weeks.