For long-time Silver Valley residents like Chase Sanborn, owner of Wallace Brewing Company, Lookout Pass Ski and Recreation Area is the perfect place to leave the crowds behind and immerse yourself in the winter wonderland of the Bitterroot Mountains. “I learned to snowboard up there in 1991,” says Sanborn. “It’s always been a fun mountain. You can just get right on the hill and get going, which works perfectly for me.”

Sanborn grew up in Sandpoint and moved to the Silver Valley in 1990, where he and his brother Del established a snowboard mitt company called Batwaves. “Back then, there wasn’t equipment and clothing designed specifically for snowboarders,” explains Sanborn. “So, you had these gloves that were thin nylon – they didn’t hold up. If you dropped your hand through the snow hard pack or if you went through the trees, you just tore up your equipment.”

They launched their brand first at Schweitzer, but finding affordable business space in Sandpoint was difficult. The situation was just the opposite in the Silver Valley. They opened shop in Mullan in the early 90s, then moved operations into the old JC Penney’s building in Wallace. “There were a lot of people [in Wallace] who were our age,” says Sanborn. “It was also close to two ski areas and a lot of great mountain biking trails. It was the perfect environment for what we were doing.” 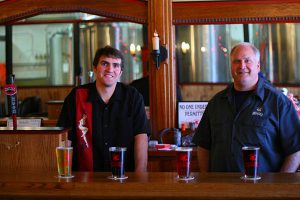 As the business grew, Sanborn and his brother began to build relationships and work closely with the then owners of Lookout Pass: Dean Cooper, Jim Fowler and Don Walde. Together, they built the first snowboard park at Lookout and held a number of events, including a week-long snowboarding camp. They brought in pro boarders to teach, and each camp concluded with a cross-style race. “It was a lot of fun to put this on,” recalls Sanborn. “Several hundred kids would show up. They learned a lot, they had a chance to race, and we had lots of prizes for them. My association with Lookout has always been a pretty strong one.”

For over 10 years, the Sanborn brothers made their heavy duty mittens and even sponsored extreme riders, such as Jay Liska and Tex Davenport. However, in 2000, they decided to move on to other ventures. Sanborn now stays busy as the co-owner of Wallace Brewing with former Lookout owner Dean Cooper, but that certainly doesn’t mean he’s given up snowboarding.

“I really enjoy carving,” says Sanborn. “I like nicely groomed runs with maybe a little powder on the side so I can hop off the groomed and barrel down some powder for a little while, then get back onto the groomers.” Although, he did help build a full-size half pipe in Lookout’s parking lot in the 90s, and considers himself a “really strong intermediate” rider, he prefers to keep his feet on the ground. “I’m an earthbound guy,” he says. “The parks are fun to watch, but I prefer to be as close to the ground as I can get.”

These days he says he still chooses Lookout Pass over any other ski area in the Inland Northwest, both for snowboarding in the winter and mountain biking in the summer. And, as the president of the Wallace City Council, he firmly believes in the community he and others are building in the Silver Valley. “It is a great community to be a part of, and Lookout is a great partner for events year-round.” //