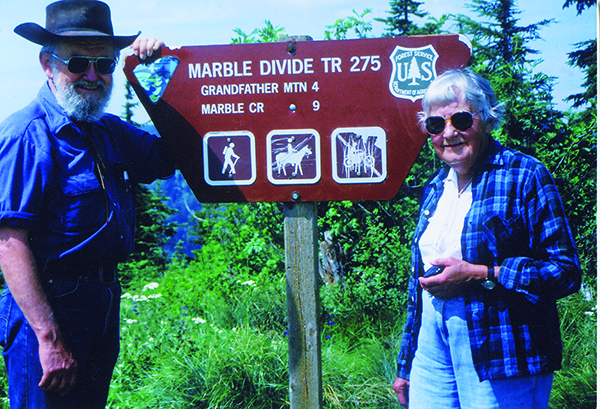 In 1988, an “Old Timers Reunion” was held in the North Cascade’s Washington Pass area. On Mt. Spokane, the ground breaking of the cross-country Selkirk Lodge took place with the help of the Spokane Mountaineers and the Inland Northwest Nordic Club.

In 1989, member Sara Gross was chosen to be the photographer on a Cousteau Society trip. Long-time member Earl Ferrier passes away. Earl had been an active member since 1937. Membership dropped a bit that year to 447.

In 1990 the Mountaineers celebrated its 75th Anniversary at the Ridpath Hotel. The club elected John Roskelley, Kim Momb, Jim States and Chris Kopczynski to Honorary Membership. Bob Loomis, author of the Inland Northwest’s original climbing guide, was elected president that year. Don Hutchings and Jane Shelley organized a climbers exchange with several Czechoslovakian climbers they met while on a vacation in Czechoslovakia.

In 1991, Chic Burge holds the 2nd Star Party for the Spokane Mountaineers and also organized a Kootenai County Backcountry Safety presentation, so non-members could learn the importance of proper clothing, equipment and essentials needed for safe outings. These classes lasted for 12 years and helped introduce many new people to the joys of the great outdoors.

In 1992, Lynn Smith leads his first Wednesday Night Hike to Liberty Lake State Park. Lynn went on to organize 26 Wednesday Night Hikes each year to date (2015 and beyond). The idea of the 10 Essentials was expanded to 13 Essentials for all members to carry on all club events. The first “mention” of a Spokane Mountaineers-led kayaking trip (to Lake Pend Oreille) happened thanks to Chic Burge. That year Linda Dygert (Nowak) led her first of 21 Mt. Bachelor club ski trips. Member Ken Scholz designs and builds the club’s Honorary Membership Plaque, in which all Honorary Members’ names are engraved with the year of their induction. The plaque is a work of art. Kelsey Loughlin leaves for her attempt at Ama Dablam in the Himalayas. Kelsey is the first Spokane Mountaineer woman to climb in the Himalayan Mountains. Chic Burge is elected club president and leads the first Adopt-A-Lake conservation clean up to Lone Lake, beneath Stevens Peak.

Learn more about the Spokane Mountaineers and become a member at spokanemountaineers.org.