Local Skier Makes It to the Big Time 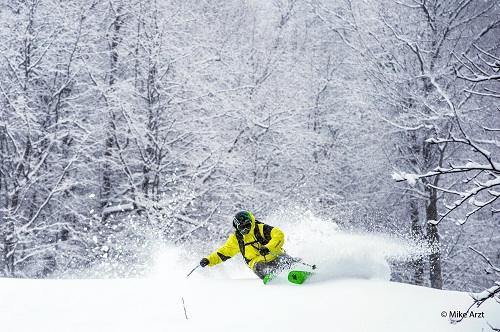 Warren Miller is considered by many to be the highest stage in the world for snow-sport athletes to showcase their talents. Every fall, masses of powder-hungry skiers and riders looking for their annual pre-season stoke flock to local theaters to see the next generation of Warren Miller athletes and the exotic locales where they push the limits of skiing and riding.

Once an athlete is featured in Warren Miller, life changes for them in a pretty dramatic way. Ski bums become “professional skiers” overnight. Photo-shoots, sponsorships, ad campaigns and movie contracts are often the norm. For one particular Washington State skier, the dream of being a WM athlete became a reality back in 2008. Six years later, Tyler Ceccanti is now a fixture in the current WM athlete lineup, with this year’s “No Turning Back” being his 5th WM film to date. OTM recently caught up with Ceccanti to find out what being a “big-timer” is all about.

OTM: So when, where and how did your ski journey begin?

Ceccanti: I grew up in Lake Tapps, just outside of Seattle. Lots of people taught me how to ski and progress, but it was my mom and dad who first got me on the slopes at the young age of 2. I started skiing at Crystal Mountain, and I continue to live and ski there.

OTM: How does an everyday ski bum become a member of the Warren Miller athlete cast?

Ceccanti:   Back in 2008, WM was shooting a segment at my home mountain, and they needed a skier for a backcountry segment. The staff at Crystal suggested me, and the rest is history.

OTM: Do you have any notable accomplishments in skiing? Awards?

Ceccanti: I competed a lot when I was younger on the Junior Freeride Tour and won a couple stops along with being invited to and winning People’s Choice at the Redbull Coldrush in 2008. I also take pride in any photos I get published in mags, along with any films I am in.

OTM: Who are your skier heroes?

Ceccanti: My biggest idol would have to be Seth Morrison. When I first saw him sending huge backflips on big lines it really inspired me, and he is still out there killing it.

OTM: Do you ski year-round?

Ceccanti: I love the four seasons here in the Northwest. I spend about 100 days a year on snow, but when spring comes, I’m definitely ready to hang my skis up and start wakeboarding. I also love downhill mountain bike racing – especially on the courses at Schweitzer and Silver Mountain.

OTM: Without giving too much away, what’s your segment in “No Turning Back” look like this year?

Ceccanti: We went to Greece, and I was totally blown away by what we found. I never would have thought about skiing in Greece in a million years, but it was pretty cool.

Look for Tyler and the rest of the gang in this year’s Warren Miller feature “No Turning Back” in theaters this fall. Check out the complete list of Northwest tour dates at www.skinet.com/warrenmiller/NTB-Tour. //