It’s Never Too Late: Learning to Ski as an Adult is a Life-Changing Adventure 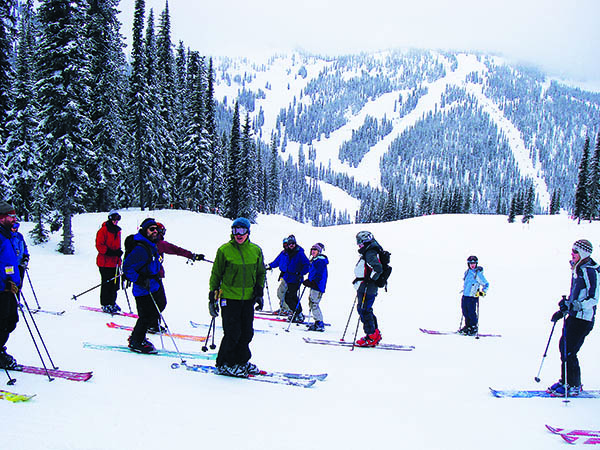 The first time I clicked in to skis, I didn’t know how to turn, how to weight my legs, where to put my hands. A guy with snow in his beard pointed me straight down the hill and I took off, letting my natural balance and my inability to know any better keep me afloat until it was time to stop or change direction, at which point I fell over. In other words, I skied like a kid. I was 32.

I grew up in the scrubby second-growth forests of southwest Washington, where the best sliding surface around was mud, in great abundance. mountain biking was a year-round sport, winter only bringing colder rain than the other months of the year; I only visited Mt. Hood, the nearest ski area, for downhill mountain bike races.

However, as an adult living in Spokane, I realized that skiing is an essential component to a healthy social life: skiers often say “there are no friends on a powder day,” but if you’re young and active and a non-skier, it’s closer to “no friends in the winter.” I tired of friends asking me when I was going to learn to ski, just as they tired of my constantly evolving excuses for why now wasn’t a good time to dive in.

So, several seasons back, I buckled under the peer pressure and bought an all-around touring setup, this despite the protests of even the ski shop salespeople: “You really should rent a few times to see if you even like skiing.”

Like skiing? No, I knew I was going to hate it for a while before I enjoyed it. But I knew that being two-thousand dollars on the hook for it was going to be great motivation to stick with it, that pair of Black Diamond skis by the front door an unavoidable reminder of my investment.

The conventional wisdom is that learning to ski is easier as a child than an adult. Children have a natural fearlessness, sense of balance and muscle memory that allows the “skiing bug” to imprint itself more quickly and deeply. Adults, with fully formed skeletal systems and knowledge of their own mortality, tend to “ride the brakes” down the ski hill and, consequently, toward any sort of ski mastery.

But I realized that, as an adult, I have several advantages when it comes to ski instruction. I know the right questions to ask of an instructor and can make quick mental adjustments to my technique. I also have the ability to set long-term goals and the patience to understand that, even if I’m cold and miserable and flailing today, there’s a long-term payoff. Also, I can drink. 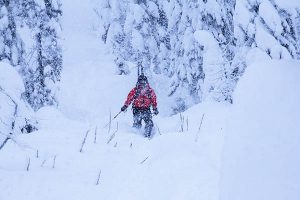 The flipside to making mental adjustments to one’s technique is “analysis paralysis,” which in skiing can lead to “spinal paralysis.” I’d take an hour lesson or get a pointer from a friend and fixate on that one new trick –“this is finally going to be the key that unlocks my skiing potential!” – and not on the gestalt of skiing as a fluid activity. (Also, I’ve learned that shouting any sort of skiing affirmation, whether in my head or out loud, is an express ticket to a tree well.)

For a season or two I tottered toward some sense of skiing ability, balancing the occasional private lesson with maddening backcountry forays. I enjoyed skiing but never had that gaper-grin sense of abandon that I saw on friends and in ski movies. Rather, I was skiing to stop, rather than skiing to go. I was always “looking for the exit,” so to speak: mentally and physically preparing to turn into the hill and stop, which inevitably led to getting too far into the backseat of the ski and falling.

Finally, this fall, I had an epiphany, far from any snow. Jogging down a mountain trail, miming mountain bike handlebars in my hands – a vestige of downhill race course scouting – I realized that skiing is quite literally like riding a bike. Momentum is your friend. Bend your knees; get in a fighting stance. Look where you want to go, not where you don’t; your body knows how to get down the hill if you’d just get your mind out of its way.

So, the next week, on an early-season backcountry touring trip high in the Whitefish Range of western Montana, I drank a cup or two of wine and I told myself, “you may as well fall skiing assertively rather than fall skiing passively.”

I then linked the best sequence of flowing powder turns I’d ever done, juking around subalpine saplings and riding out the early-season lumps of barely buried stumps. I even launched myself off a rock kicker, completely heedless of my ability to land upright. (This time, I saved my celebration for after the powder face plant.) And I grinned stupidly the entire time. Because, as much as adults have the ability to focus on skill building and delay gratification, any kid will tell you that skiing is supposed to be fun.

Despite the “no friends on a powder day” adage, I’ve had plenty of friends patiently sacrifice powder stashes to give me pointers or indulge my profanity-laden mutterings as I search for a ski under a snowbank. They may not remember the first or last time they spear-tackled a subalpine fir when both bindings simultaneously released mid-turn, but they can laugh with me about mine.

Also, they can drink too. And if I can repay their patience with a beer –and, hopefully, handicap their skiing ability in the process – then we all get down the hill so much better. After all, there may be no friends on a powder day, but everyone – skier and snowboarder, first-timer and old-timer alike – is friends in the ski lodge. //

January Is Learn to Ski/Snowboard Month!

Every January, resorts around North America, including here in the Inland Northwest, celebrate Learn to Ski and Snowboard Month with excellent deals. Affordable packages include lessons, rentals and lift tickets for adults and kids who want to get outside and learn to ski or snowboard. Local resorts, including Mt. Spokane, 49 Degrees North, Silver Mountain and Lookout Pass offer great package deals for beginners all season long, but come January, the savings are even better. Plan ahead and don’t miss Learn to Ski/Snowboard month this year and let another winter of fun pass you by. To learn more about learn-to-ski programs for kids and adults at your favorite resort, visit Skinwrockies.com.

Aaron Theisen is a Spokane-based outdoors writer and photographer. He is co-author of the book Day Hiking Mount St. Helens.