“I quit $3.75 an hour to work here,” reads a message scrawled on the recently unveiled historic cycling wall at Wheel Sport Bicycles on Division Street in Spokane. The quote, along with the many other messages and signatures, serve as a reminder of the many riders who traveled across the country by bike, touring the U.S. several decades ago. In the early seventies, a national trend inspired cyclists from all over to set off on tours around North America and the world. Spokane was a stopping place for many of these riders, including some who left their names and stories on a wall at Wheel Sport’s downtown location. The wall was later covered up behind wood paneling.

Many of the messages give stopping and starting points of the riders, as well as the occasional funny quip or motivational line. A rider quitting their $3.75 an hour job might seem unimpressive nowadays, but, keep in mind, the minimum wage at that time was around just $1.60 to $1.80 an hour. Some riders left everything behind in pursuit of their goals and adventure.

Other signatures give an idea of just how far some riders had come: “Brussels—Amsterdam—Frankfurt, and all paths between, summer of ’74,” one signature reads. “Scotland—Germany—Madrid—and where the mood strikes me,” reads another. Some are “on the road to find out,” while others are “experiencing the magic of the wind.” Wherever they had been, wherever they were going, and for whatever the reason, these cyclists left their messages and found camaraderie in the journeys of others in a shared space on a bike shop wall here in Spokane. As Wheel Sport owner Terry Solinsky says, “it is invigorating to read the comments of all who signed the wall and imagine their joy of the journey.”

Despite the popularity of the wall, it was covered up in the mid-80s as part of a decision to update the store’s showroom. The wall remained hidden for over thirty years. “The decision to uncover the wall was partly a result of curiosity, but mostly to view the history of that era,” says Solinsky, who has been in the bicycle business for over 40 years. Solinsky got his start in the industry as a wholesale rep for Peugeot bikes, covering the Northwest all the way up to Alaska before buying the Wheel Sport store on Division, where the wall was hidden, in 1985.

In addition to the signatures and messages, large black and red lettering gives a bold shout out to Peugeot as “Europe’s Number 1 Bike,” reflecting the company’s prominent place in cycling history. The Peugeot family, makers of Peugeot bikes, backed their first Tour de France winner in 1905, and later went on to back winners of the race 10 times. Peugeot bikes were famous in the racing and touring world. In a fitting honor to the company, Solinsky and his team fixed up a few old Peugeot touring bikes to put on display above the wall.

The wall also displays pictures of old Tour de France racers, some smoking cigarettes as they bike, others with a beer in hand at the end of the race, which is not something you are likely to see today.  “Riders used to believe that smoking helped to open up your lungs,” explains Solinsky.

Solinsky hopes the wall serves to inspire aspiring touring cyclists and educate people on the part Wheel Sport and Spokane played in the golden era of bike touring. “It is a warm and gratifying feeling that Wheel Sport shared a small part of the joy and struggles of those adventurers as they crossed our nation,” adds Solinsky. “We invite you all into Wheel Sport to view the wall and perhaps reminisce about your own extended tour.” //

Elena Gardner is Out There Monthly’s Associate Editor. She wrote about local sports medicine innovations and hiking at Bead Lake in the October issue. 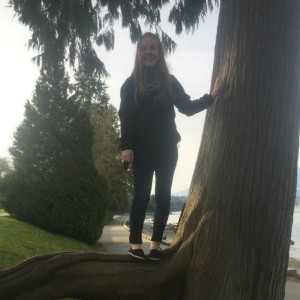