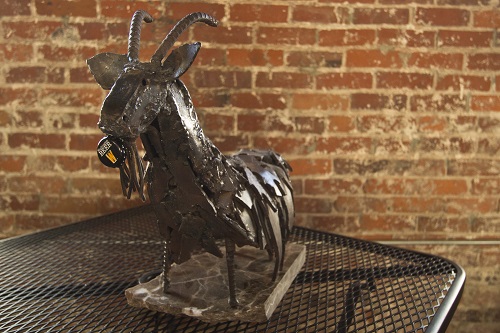 Word on the street is that it’s possible to “interview” the Iron Goat that rests on the bar of the Iron Goat Brewery tasting room. We had our doubts, but after we learned the conversation required copious amounts of Iron Goat beer, we knew it was worth a try. Following a couple delightful pints (or more) of the Impaler, the Iron Goat started to relax and show his true colors. He goes by the name Brewski, and he absolutely loves being a mascot. However, unlike the iron goat by the Looff Carousel in Riverfront Park, Brewski does NOT like it when people try to put trash in his mouth.

The big news at the brewery these days is that Iron Goat Brewing has started bottling their beer. The Impaler and the Head Butt reached local stores last month, and the Trashy Blonde and the Goatmeal Stout should be on the shelves in April.

Brewski loves seeing his silhouette on a bottle. Before leaving, we asked Brewski if his mom was impressed with his growing popularity. Without hesitation, he proudly reported he is an original masterpiece created by Sister Paula Mary Turnbull, the very same artist who created the Riverfront Park iron goat, and he is proud to be a part of her legacy. //