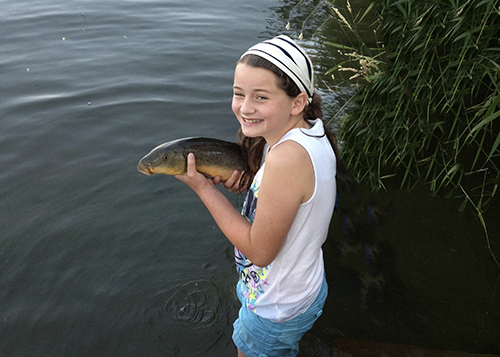 A friend of mine has a sign in his house which reads, “If You’re Lucky Enough To Live At the Lake, You’re Lucky Enough.”  As a fellow lake-side dweller, I frequently question the kind of luck that sign alludes to, especially when the boat breaks down, the dock needs work, or some other uber-expensive thing-a-ma-bob has to be repaired/replaced/retro-fitted by someone way more mechanically inclined than me.

Like most places, living at the lake has its ups and downs, but the biggest benefit for me has been the opportunity to teach our kids how to fish. To be honest, I wasn’t sure if they would take to it, especially since fishing now has to compete with the likes of iPods, Xbox, “I Want to Marry Harry,” and other mindless distractions. Plus, as a relative newcomer to this parenting thing, I have no idea if they appreciate anything I do. The fishing gods smiled upon me, though, and re-affirmed my faith in fishing with a letter that my 10-year-old sent me not long after learning the sport:

Dear Brad,
Thank you for helping me out with my situation of catching a fish. I had a tuff time getting this big fish on my line. I kept trying and trying, but I couldn’t get it. But, when I was in doubt, you helped me out. You taught me that when the fish was about to bite the line, I should watch his mouth. When his mouth bites the line, you told me to set the hook. When I did that, the hook caught in the fish’s mouth, I reeled it in and I got the fish. That day was awesome. So, I just want to say thank you.

I will admit that this letter brought tears to my eyes, but the most rewarding part came the following summer. It was the first weekend of summer vacation, and the kids were already going at it, bickering over who was the master of the remote control or what video game to play next. I was a quarter mile from the house but heard the crystal clear voice of their mom yell “Enough! – Get Outside!”

Not long thereafter, it got real quiet – too quiet. As I approached the top of the stairs that lead down to the docks, I witnessed something so pure words barely do it justice. Both kids were quietly casting and reeling lures, trying to hook into some bass. No harsh words passed between them; the only sound heard was the “plop” of the rubber grub as it hit the water. They were in the zone. I smiled. Yeah, I guess we are lucky enough. (Brad Northrup) //