Half Marathon Training for the Over 40 Crowd 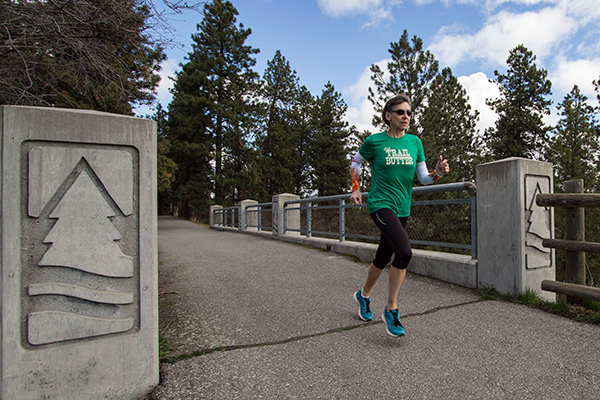 I thought I was going to puke. Or soil my knickers. Or both at the same time. I was hunched over, hands on knees, gasping for breath. Sweat poured from every pore of my body. Two miles into a supposedly leisurely Saturday morning run and I felt like hammered dog poop. What idiot thought that this was a good idea?  Oh yeah, this idiot.

Fast forward two and half years. Standing on the podium with a 3rd place trophy in hand and a 1:39 personal record time on the books, I thought back to when I started training to race half marathons. I honestly never thought I would ever run that far that fast at age 45. But all it takes is the right kind of training and the belief that you can do it. I know that sounds cheesy, but it really is that simple. I did it in less than three years, and I was definitely not a runner when I started. Back then, I only ran when chased. Here are some things I learned.

Set a Realistic Goal: When I started out, I knew nothing about half marathons or what to expect. That said, my goal for my first race was just to finish. Shoot, the furthest distance I had ever run in my life was around seven miles and that was in my twenties. With no experience whatsoever, I figured the most realistic goal was to finish a race, regardless of time. Once you gain experience and an understanding of what your body can (and can’t) handle, then set a time-related goal.

Follow the Plan: If you want to run 13.1 miles, your body has to get used to running longer distances, and this takes a period of time—usually about 12 weeks. The formula is pretty easy to follow. Run 3-5 miles 3 or 4 times during the week, and a long run once a week, working your way up to somewhere between 10 to 12 miles. There are all kinds of plans out there on the internet, but they are all very similar. Here is the key: stick to the plan. This is where discipline comes in. You can cheat a little on the shorter runs during the week, but DO NOT cheat on the long runs. Doing so will end up crushing you on race day. As you gradually work your way up, the shorter runs during the week will get easier and easier. Your training plan can obviously be modified if you are working to improve your time. Speed or interval workouts can be inserted during the week, and you can replace a longer run with a 10k race or two as you progress.

Stay Motivated: Most normal people don’t just choose to run a half marathon on a whim or because it looks fun. I got into it because I was out of shape. As in an extra 20 pounds out of shape, and let me tell you something: 170 pounds on a guy who is 5 foot 7 does not look or feel good. So I did something about it, and having a goal to lose weight and feel better served as a great motivator. Once I completed my first race, I realized I enjoyed it and started setting time-related goals. The point is have something that drives you to get out and train, especially when you really don’t want to. Staying motivated gets easier as you experience success, so stick with it.

Maintain the Right Pace: The rule of thumb on training pace is that, on your long runs, you should run at a rate that allows you to hold a conversation with someone. If you are out of breath, you are running too fast. Over time, you will become very comfortable running at a certain pace, which will allow you to speed up or slow down depending on the terrain. Many beginning runners utilize running apps to monitor pace, but I think listening to your body is a better way to go if you are starting out. For my first season, I did not even wear a watch or use any apps—I just ran and let my body tell me when to speed up or slow down.

A half marathon is a great goal for most people because it is easily achievable with a reasonable amount of training time and not too much stress on the body. Does it still require hard work and effort?  Absolutely. Are there days when you just want to crawl back on the coach and binge-watch Game of Thrones and shove a half gallon of ice cream down your throat instead of going for a run?  Yep. But if you refuse to give up and throw in the towel, the reward of finishing is well worth the sweat.

Lessons Learned Training for a Half

I definitely made some stupid mistakes my first year out. Like not carrying water on my shorter training runs during the week. Or choosing shoes based on price rather than performance, and then not replacing them early enough. Also I didn’t invest in good running clothing and had some nasty chaffing in areas I really do not want to talk about. But I did a few things right that helped me on race day, the biggest of which was training on very hilly terrain. Running a lot of hills makes flat surfaces seem easy. I also took extra rest days and got plenty of sleep when my body started to wear down. //