Hannah Tolson just might be the best all-around female collegiate climber in the nation. In 2017, she won the National Championship in the women’s collegiate sport climbing division. This year, she set her sights on sport climbing, speed climbing, and bouldering, and she stunned the judges by finishing third, third and fifth. By entering all three categories, she committed to a 15-hour competition day unlike any previous day of climbing in her entire life. This 2018 climbing success is even sweeter because her overall scores qualify her for the US Climbing Team, and she has been invited to travel to the 2018 World University Championships taking place in June in Bratislava, Slovakia. 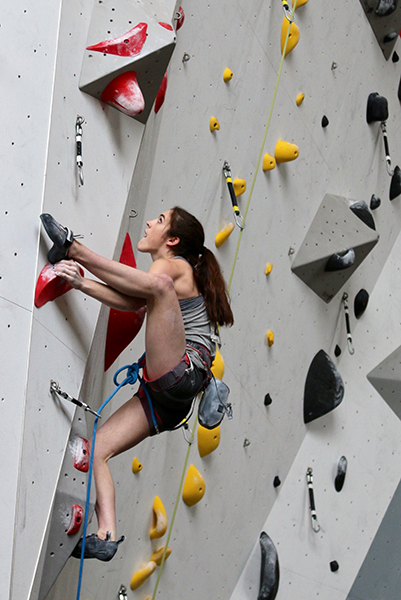 “The pressure was definitely on because I knew Slovakia was on the line. Last year, I chose to specialize in one discipline and try my hardest at it to take the gold. I wouldn’t trade that win for anything, but making top five in all three disciplines this year has felt even more special,” says Tolson.

The difference for climbers competing in all three disciplines is they essentially complete three competitions in the time every other climber finishes one. It’s mentally and physically exhausting, and it’s especially difficult climbing next to fully-rested climbers. After all the scores were tallied, Tolson learned she was the only US climber (male or female) to qualify for Worlds in all three disciplines. “I owe it all to the constant support from Gonzaga University, and the help from my trainer, Travis Knight,” she says. “He does the training for several Gonzaga teams. Next stop, WORLDS!” //