A few years ago there was some talk and a little effort made towards unifying cyclists in Spokane. If memory serves me correctly there was at least one meeting, but the group could not reach a consensus on how to move forward. Attempting to do the same thing today would probably result in the same outcome. Cyclists may share a common interest of riding bikes, but we are a varied and diverse group when it comes to motivations, expectations and needs.

We don’t need someone to be a spokesperson. But we should have a voice, so I’m proposing something to help give us that voice. Instead of unifying cyclists into a single entity, let’s just connect them.

Spokane has an amazing amount of bike riding. Local shops host demos, maintenance classes and shop rides. Between the many formal and informal clubs, there are a multitude of rides to go on. Road, the full moon, trails, vintage bikes, BMX tracks, the fourth Friday, snow and who knows what else beckons us to ride for sport, competition, recreation and fun. So let’s get connected.

Last year I created a Facebook page called GASUP: Get Around Spokane Using Pedals. The purpose of the page is to promote cycling in Spokane. The idea was to create a place where anyone in Spokane could find out about all manner of bike riding and contribute to the cycling community as well.

I don’t want to mislead you and make you think I did this with some sort of grand vision in mind. I began with a page for 30 Days of Biking, which is held every April. Once that was over, I changed it to Bike to Work Week, which is in May. In June, I was wondering what to do with the page when I remembered an incomplete video project I set aside a few years ago. I called it GASUP, the name of which is about the only clever thing I’ve ever come up with, so I changed the page name one last time. Instead of having a page dedicated to a single aspect of cycling, like 30 Days of Biking, I went with a page where the entire, diverse cycling community could participate.

What can you use GASUP for? Are you a commuter? Do you have a safety tip? Is there an intersection that seems to be problematic for cyclists? Is there an unsafe condition that other bike riders or the city/county need to be aware of? GASUP is a place where you can share all that and more. 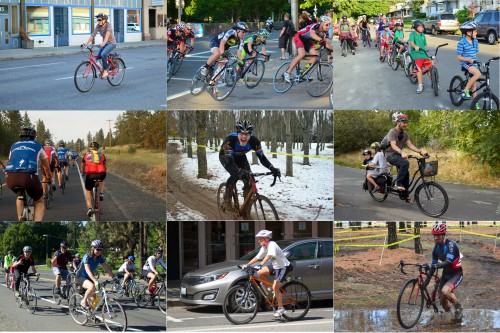 I often ride with a camera recording video during my commutes, and I almost always have a camera on me. I’ve used photos and videos to share situations, some harrowing and some humorous. Sometimes it’s a vehicle driver not paying attention and sometimes it’s a driver who is. I try to post situations that provide learning opportunities for fellow cyclists and some just for fun. Other GASUP members have been doing the same. It’s been great to see what other people have been sharing.

What else can GASUP offer? How about advocacy? If Spokane County or the City of Spokane is holding an open house, proposing changes to a roadway or traffic lights or something like that, then you could use GASUP to get the word out and encourage cyclists to attend or speak up. Spokane has some great community cycling events like Spokefest, Summer Parkways, Kidical Mass and Bike to Work Week, and GASUP could introduce people to more opportunities to ride, volunteer and be cycling advocates.

If you have a bike shop, GASUP can be a place to reach other people by sharing your classes, special events and shop rides. (No sales, please.) Clubs can share upcoming club or group rides. If you’re putting on a race, post it on GASUP. Maybe you’ll expand your ridership, participation or recruit some volunteers.

You can use GASUP for just about anything bike related. Are you new to cycling? Are you looking for more information about racing or commuting? Would you like to take up a different type of cycling? Maybe you need to know something important, like the proper etiquette for blowing a snot rocket while riding in a pack. (Down, not out.) Yes, that is important. Just ask the person behind you.

Again, the idea is not for us to join together into a single entity. It’s about connecting our diverse cycling community and enriching it. It’s about increasing the number of times our paths cross, saying “Hi!” to people while you’re out riding, and having fun.

So GASUP and leave the car at home. //