Friends of the Falls and Spokane River Forum Announce Merger 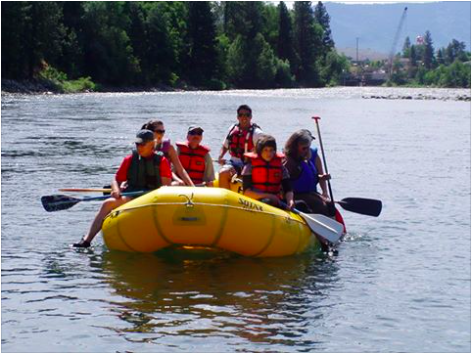 “The work of Friends of the Falls was transformative. They profoundly changed the community dialog and triggered millions of dollars in investment by reconnecting our community’s thinking and souls to the river and what it can and should offer us and future generations,” says Jeanna Hofmeister, President of the Spokane River Forum. “The Forum is fully committed to continuing and expanding their bold vision.”

Friends of the Falls started in 1997 as a coalition spanning the political spectrum to oppose replacement of the historic Monroe Street Bridge along with development of the Lincoln Street Bridge. That success was followed by development of the Conceptual Plan and, in 2005, the seminal “Great Spokane River Gorge Strategic Master Plan.” The plan’s vision proclaimed the goal to “enhance and preserve the splendor of the Gorge and river as a central feature of the Spokane region for generations to come.” The plan, which is focused on the Great Gorge area west of downtown, identified over 25 million dollars of potential public and private projects to protect and restore the area, as well as to connect residents and visitors to recreational experiences, while honoring the river’s rich cultural and environmental history.

The Spokane River Forum started in 2008 with the mission to create materials, events and activities that promote regional dialogues for sustaining a healthy river system while meeting the needs of a growing population. The Spokane River Water Trail is one of the Forum’s most successful initiatives. By building partnerships, new and restored access points have made the river far more accessible, while also providing critical environmental restoration.

Andy Dunau, the Forum’s Executive Director, notes how astounding it is how much of that vision has already come to pass or is actively being developed right now. Construction of the Sandifur Bridge, redevelopment of Huntington Park, development of Kendall Yards and installation of green infrastructure in the area have all come to fruition. The Spokane City Utilities Department has now committed to completing a loop trail through Peaceful Valley with connectivity to downtown. In addition, the City Parks Department has completed a master plan for Glover Field, including identification of a new river access site. “It all fits,” adds Faust, “with what the Great Gorge Plan envisioned and what the Olmsted Brothers first advocated for in their 1913 Parks Plan. ‘Nothing,’ noted the Olmsteds, ‘is so firmly impressed on the mind of the visitor to Spokane, as regards its appearance, as the great gorge into which the river falls near the center of the city…any city should prize and preserve its great landscape features, inasmuch as they give it individuality.’”

Looking to the future, the Forum will use funds previously raised by Friends of the Falls to improve river access, restoration and recreational opportunities in the Gorge. These funds, notes Faust, were originally raised for development of a whitewater park in the gorge area. “Ultimately, we were unable to secure the environmental permits required to build it,” Faust says. “The Spokane River Forum is involved in several projects in the Gorge area where these funds can still provide a benefit to boaters and to the broader community.”

Dunau says the Forum initially plans to focus FOF resources on Glover Field. Plans have already been developed, collaboratively by the city and multiple stakeholders, to improve river access for paddlers, anglers and rafters, offer neighborhood improvements by addressing parking and other concerns, and support a trailhead linking downtown and a loop trail. As part of the merger, the Forum will offer donors to the Whitewater Park Fund the opportunity to request reimbursement of their donation.

On June 3, both Friends of the Falls and the Spokane River Forum will celebrate the merger while raising funds for future river projects at the Water to Wine Auction at Arbor Crest Wine Cellars. “The dream Friends of the Falls started is alive, and the work goes on via the Forum,” Hofmeister promises. The Water to Wine event will celebrate the two organizations’ efforts with music, wine, hors d’oeuvres, and education and will support river access, restoration and cleanup projects. More info: Spokaneriver.net/watertowine. //