I hiked up the steep trail to the top of a volcanic canyon in northern Chile to fetch water, which flowed through a slim canal to the village 10 kilometers downstream. The buzz of altitude and midday desert sun slowed me down, and it was so dry that my sweat evaporated before it could cool me. Another climber, mostly naked and standing in the stream, was pouring water on his head with the same kind of five-liter bottles I intended to refill. The cold water laced down his back and plastered his long hair to his head, and he looked ecstatic as he washed away the grit and heat.

The next day when I returned for the same errand, I met a woman from the village who wore a cardigan, skirt, wool tights, and a hat tied to her head with a coarse ribbon. Only the dark skin of her hands was exposed to the sun. She approached me and said, “Senorita, could you tell everyone that the water is only for drinking?” I said that I would and I apologized, even though I had not been caught bathing in the stream. I realized that camping for weeks in the canyon without formal permission was one thing, but I also saw that we disrespected one of the Atacama Desert’s greatest miracles — the fresh water flowing from the Andes to the ancient towns.

Since this moment years ago, I have been much more aware of the historical and political contexts of the regions where I climb, not to mention localized approaches to land management and development. Fortunately, climbing in the Northwest offers the opportunity to learn many important aspects about the cultural implications of climbing before ever leaving the country. 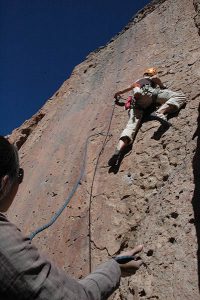 Summer Hess is a writing instructor at Eastern Washington University and manages special projects for the Community Building. She profiled swimmer Susan Hales in March.