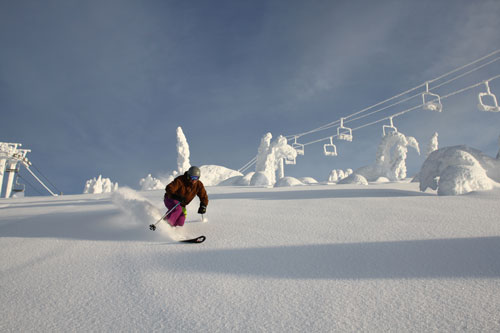 Laying down the first set of tracks on a pristine slope takes a bit of extra effort, mainly getting an early start to be first in line when the chairlift starts running. Most skiers and boarders aren’t able or willing to score first chair on a regular basis, but the first tracks “getting after it” mentality is something all of us can kick into gear in our own ways to get a jump on the ski and snowboard season.

Don’t wait until the night before your first day on the mountain to gather up your gear and dust off the cobwebs. The season really starts weeks in advance of opening day. Many serious skiers and snowboarders start training with a regular exercise regimen months in advance of the first snowfall to be sure that their bodies are primed for making sweet turns without ending up with a sled ride off the mountain. Others pull out last year’s gear to plan out new gear purchases and ski swap strategies once the days start getting shorter and colder each October. And then there are the annual winter kickoff celebrations: the ski and snowboard films (there are several showings planned in Spokane, Coeur d’Alene, and Sandpoint), swaps and ski shows, Pray for Snow parties, season pass sale deadlines, ski and board shop sales, backcountry and avalanche awareness classes, and impromptu basement or garage board tuning parties.

The cool, crisp months of autumn, when fall leaves compete for the slopes with the first dustings of snow, are some of the best months of the year. Don’t wait until the resorts are open and backcountry runs are filled in to start building the stoke for winter—there are plenty of events and preparatory task to occupy the days between now and opening day. If you just can’t stand it anymore and need to get out, hiking or biking your standby trail, glade, or hidden stash is a great way to check out the underlying terrain that makes those turns so sweet before they are buried in feet of deep white stuff. The clock is ticking—don’t wait for the alarm. The season starts now. //