Out There OutdoorsMay 13, 2020Get Out ThereHikingLast Page
Gail Hill and her husband, Ron, head out for a bike ride from their farm in central Oregon. // Photo courtesy of Joan Kinsey 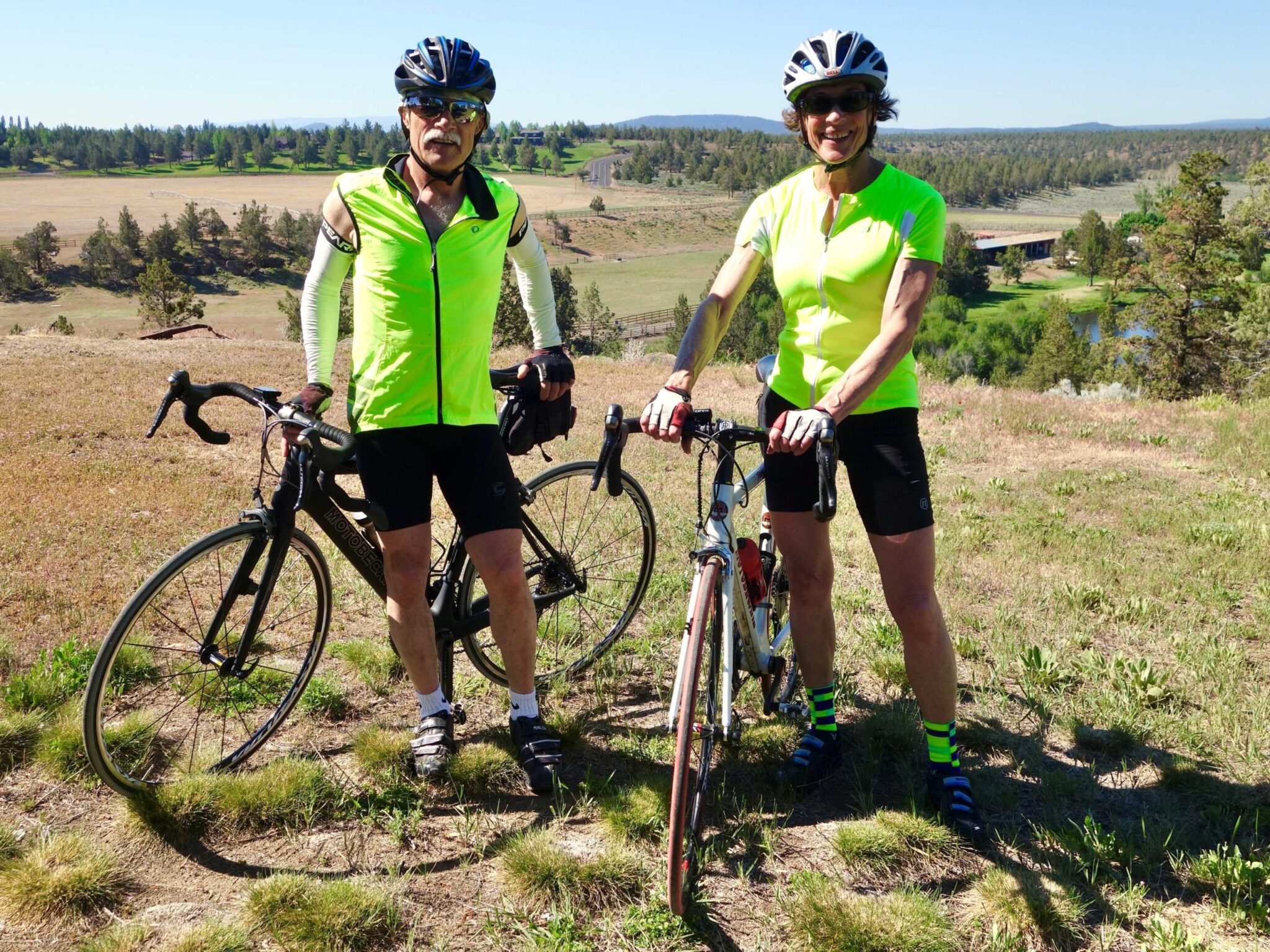 Clouds were gathering over Oregon’s high desert as I searched the steep slope below for the trail that would lead us back to our campsite at Campbell Lake. My husband already had begun angling down through scattered brush and lodgepole, hoping a closer look would reveal the path that had led us to the bluff’s edge, then suddenly vanished. Nothing.

It was 3 p.m., with the lengthening shadows of a mid-fall day. The thought of returning the way we’d come, through miles of dense blow down deep within the Fremont-Winema National Forest, made my legs ache. But moving ahead could mean slogging through confounding forest debris, perhaps past sunset.

Ron and I have been hiking together for decades. To us, backtracking hints of retreat. It was no surprise, then, when he wanted to push ahead. Let’s descend into the gulley, he urged, then follow the ravine north to the lake. We’ll be sipping beers before you can say, “frothy effervescence.”

I stared at a shoulder-high cairn at my side, seeking guidance but finding only neglect. Had these crumbling rocks once marked an intersection? Were they a warning? Nearby, a faded sign, “Campbell Lake Loop,” poked from toppled trees. Again, I scanned the hillside. Again, nothing.

On the ascent, we’d skirted Deadhorse Lake and zig-zagged ridges, all the while scrambling over trees and sleuthing the on-again-off-again trail. We’d made a game of it, often splitting up in hopes of discovering the route first. We became so immersed in our competitive trail hunt that we gave little thought to the time or to turning around.

Now, as I rummaged through my pack for a remaining fig bar, I questioned the wisdom of plunging ahead. Maybe I should resist my husband’s challenge, end this game of “I will if you will,” and lobby for the known way home. Maybe.

Ron and I love our adventures. We often egg each other on, whatever we’re doing—hiking, skiing, biking. It pushes us to places we might not otherwise go. Thrilling, satisfying places.

Yet, there’s a problem the size of a cockroach in this sporty stew of ours. Competitive temperaments and marital harmony aren’t the best of bedfellows. One-on-one challenges thrive on conflict, not the likes of compassion and compromise. How, then, can any healthy relationship support both rivalry and partnership?

Further complicating matters: Ron’s the better athlete. He’s a stronger hiker, a more aggressive skier, a faster bicyclist. It’s not just that he’s a guy. He’s simply more agile and forceful than I. I might display more finesse, but that’s hardly enough to keep me in the lead.

Sports lie at the heart of our relationship. I met him at an after-ski party in Bend. 47 years later, we’re still at play. We’re now retired and living on a farm in Central Oregon.  The slopes of Mt. Bachelor lie just 45 minutes away.

Ron’s an ex-racer, and I’m not, so, I know he’ll beat me down any hill. But I’m a strong and capable skier, and it can be disheartening to always bring up the rear. Just once, I’d like to whip his ass.

As the years have passed, I’ve done a better job of blending my competitive proclivities with reason and understanding. I’ve tried to nourish the thrill while discarding the hostility. In short, I’ve worked to purée that cockroach right into our spousal concoction, aiming for both consistency and spice.

I tested my recipe on that bluff above Campbell Lake. “I think we should turn back,” I called. It’s late. Risky route, risky terrain. If we get lost, we’ll be lost for hours. Ron hesitated, then, quietly, agreed.

Three hours and countless tree-crawls later, we rounded the last switchback. The bright blue of our pop-up camper flashed through the trees.

We cracked a couple of beers and stood at the lake’s edge. Clouds hazed a setting sun, but the threat of any storm had passed. We watched goshawks circle overhead, searching the rippled water for dinner.

We gave each other a double hand-slap, our sign for a day well done. I took a sip of beer. Then another. I smiled as a voice inside me instructed: Finish it first.

Gail Kinsey Hill spent more than 20 years as a journalist, meeting deadlines for Oregon’s major daily newspaper in Portland. She replaced those professional rigors with more expansive boundaries east of the Cascades where she’s an adventure and landscape writer and spends her free time skiing, biking, and hiking.