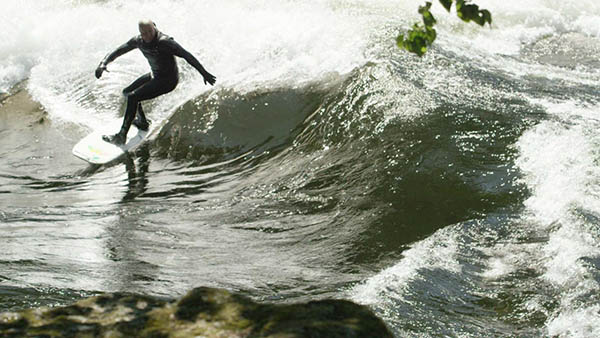 Many people would say that “learning to surf” is somewhere on their bucket list. It’s definitely on mine. Yet, the majority of people in the U.S. who live two hours or more from a coastline will rarely even visit the ocean, much less get on a surf board. In this exquisitely-shot short film, Coeur d’Alene filmmaker Jordan Halland sets out to show us how river surfing is changing that, while transforming urban waterways in the process.

“I was working in Missoula for a production company,” says Halland, “and I would see guys walking by with surfboards every day. It was the weirdest, out of place thing to see.” Eventually, he followed them down to the Clark Fork River and watched them surf the waves that cut straight through the heart of Missoula. When he started his own production company, Coup De Grace, he knew that he wanted to tell the story of KB Brown and Luke Rieker, owners of Strongwater Mountain Surf Company.

From the opening voiceovers to the closing waves, each moment highlights the thrill, artistry and insanity of this rapidly-growing mountain sport. “I didn’t want it to feel like a mountain film,” Halland says. “I wanted it to feel like a skate film or surf film.” With intuitive cinematography and music exclusively from Northwest bands, Halland and his Director of Photography, Cameron Hotchkiss, have definitively captured that “surf vibe.” But then Halland digs deeper by exploring how river surfing has been instrumental in cleaning up the Clark Fork and might possibly create a movement of urban waterway renewal across the country.

Strongwater has been selected as a feature film at the Telluride Mountain Film Festival in Colorado this May. Look for a trailer for the film coming soon at www.jordanhalland.com.