Exploring the Science behind Fall Foliage at Finch Arboretum

The Inland Northwest may not be inundated by the throngs of leaf-gazers that trample the northeast every fall, but we are blessed with a host of tree species with modest beauty that reflects Spokane’s own splendor. We are further fortunate to host two dedicated dendrophiles whose passion rivals that of any New Yorker. Angel Spell and Kacey Burke are urban foresters with the City of Spokane parks department and are eager to share their knowledge of the region’s trees, including the factors that play into the timing and intensity of the fall color display.

“The primary initial trigger for trees is light,” says Spell. Spell and Burke agree, however, that other circumstances can weigh heavily on the duration and color intensity of fall foliage. Temperature throughout the day and night, as well as precipitation, can have dramatic effects. “Under stress, the trees will turn earlier,” explains Burke. A dry summer like the one we’ve just left behind will hasten the arrival of fall colors, while warm days coupled with cool nights will prolong them, she says. 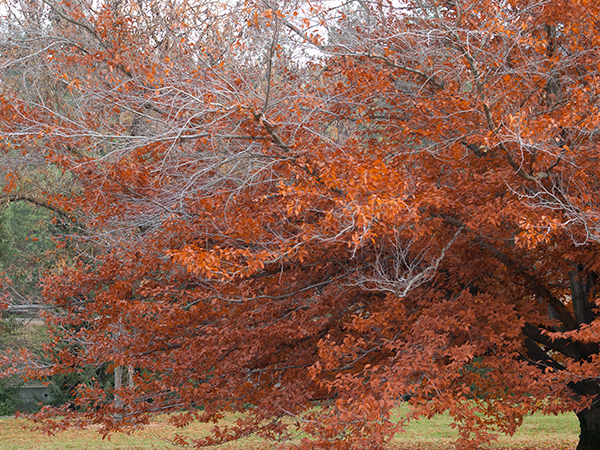 One place the trees are never stressed is Spokane’s Finch Arboretum. There the most vibrant and varied fall colors can be more predictably seen at their peak. The season is just warming up, and Burke says the kaleidoscopic show lasts a full six weeks. Soon summer greens will yield to brilliant golds, radiant oranges, fire-engine and candy-apple reds, and even deep burgundy in artful brushstrokes over Buckeye, red maple, dogwood, ginkgo, sweet gum, the stately black tupelo, and Persian ironwood, which can carry the full fall palette in its diminutive branches.

Beyond the nurturing shelter of the arboretum, where trees are more subject to sometimes-severe cycles of drought, pollution, and climatic variation, fall color displays can be less predictable, though usually no less dramatic. On a late September dog walk on the north bank of the Spokane River, I first noticed a faint flourish of yellow on the upper reaches of a south-leaning silver maple. I breathed in, acknowledging the end of another summer, and as I exhaled my eyes drifted slowly down the trunk to the low, cool river, reminding me of the inevitability of change more momentous than color. Enjoy fall’s sublime display before the hopefully copious snow whitewashes it away.