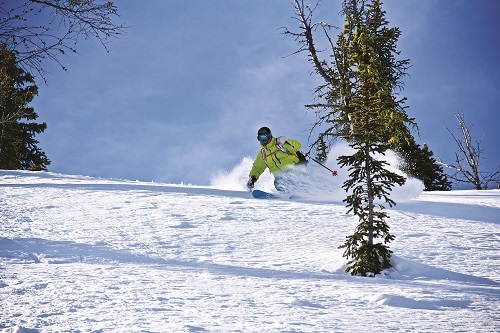 In the 1800s, Nelson, British Columbia, was a thriving silver and gold mining boomtown, and by the late 1890s it transformed into a refined city. Since then Nelson has blossomed into a thriving arts and mountain sports community. Nelson has struck gold once again. This time it’s white gold that falls from the sky. The culturally rich town is now known as the epicenter for powder enthusiasts with more than a dozen backcountry ski and snowboard operations within an hour-and-a-half drive. Nelson sits on the shores of picturesque Kootenay Lake, which is surrounded by iconic mountain ranges such as the Kootenays, Bonnigtons, Valhallas, Purcells and the Selkirks. With that kind of terrain, it’s no surprise that Baldface Lodge located itself only a few miles northwest of town.

Baldface Lodge is the brainchild of college buddies Jim Fraps and Jeff Pensiero, who started the operation in 1999. Since then, Baldface has grown into one of the premiere cat skiing operations in North America that features more than 32,000 skiable acres, three state-of-the-art snowcats, and an impressive timber frame lodge that includes a gathering room, bar, dining area, massage and retail shop. The lodge has numerous single- and double-occupancy rooms on the east wing, and there are seven beautifully appointed mountain chalets just a few yards away. 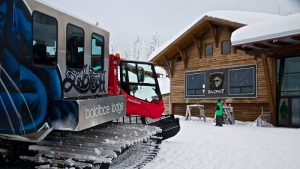 Baldface offers three- and four-day packages from December through March. All of the guides at Baldface are certified by the Association of Canadian Mountain Guides and Canadian Ski Guide Association. The guides’ in-depth knowledge will help you take full advantage of the 500-plus inches of annual snowfall and some of the best tree skiing on the planet. Pensiero calls the area “God gladed.” “If you’re riding with the fall line, the trees are always opening up, and you can get incredible flow through the trees here,” he says.

Professional skier and big wave surfer Chuck Patterson is another fan of Baldface. “The tree skiing here is amazing. It’s naturally separated so perfectly that you could ski 90 MPH with a buddy right next to you. Everything is covered — it’s like big ghost trees!” he raves. 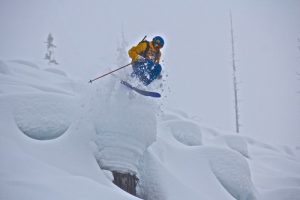 Baldface has soul that’s evident when you visit. “The vibe at Baldface is really cool. There’s no attitude here. Everybody’s just stoked because we’re all trying to get as much pow as we can under our boards. Whether it’s skiers or snowboarders, everybody has a huge smile on their face. Everybody is sharing the stoke here,” says Patterson.

The hospitality at Baldface doesn’t stop on the hill. “After an insane day of riding, you come in and grab some appetizers, soup and a beer and then get situated for dinner. The dinner is like a five-star restaurant, and half the time I feel like I’m under dressed. Last night we got this beautiful lamb shank with some great wine, and we were able to hang out with friends talking about how great the day was,” says Patterson. No wonder Baldface keeps bringing people back year after year. 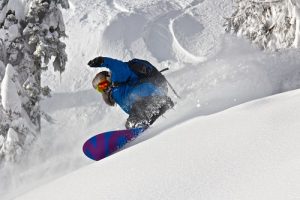 If you’re looking for something with a little more horsepower, then just an hour east of Nelson along the shores of Kootenay Lake sits Stellar Heliskiing, which is owned and operated by longtime mountain guide Jason Remple. Remple’s laid-back personality will put you at ease. He grew up in these mountains and has been guiding here for more than 20 years.

Stellar Heliskiing uses an A-Star helicopter, which will hold four guests, a guide and a pilot. “That’s one of the things that Stellar focuses on: that small helicopter and small-group heliskiing. We take people to customized places where we can dial in what they are skiing, whether it is tree skiing, steep chutes or bumps and jumps,” explains Remple.

With a reach of approximately 80,000 acres that stretches into the Selkirk and Purcell Mountain ranges, it’s easy for Remple and his certified heli guides to bring guests back tired and happy after spending a day shredding in their playground. Dash Kamp, professional snowboarder from Sandpoint, was on our trip, and he had high praise for Remple and Stellar Heliskiing. “The terrain that comes with Stellar Heliskiing is pretty unreal. There is every type of condition and feature out there. What’s so cool about it though is having a guide like Jason, who knows so much about the area, taking us to these spots,” Kamp says.

Remple loves his job. “I get the enjoyment of showing people a good time in the mountains. Taking them to the next level, letting them experience what they can do, sort-of pushing the limits when we’re allowed to and when the conditions are appropriate. I like it when guests can challenge themselves,” he says.

Spokane skier Deseri Leipham has ridden with Remple several times over the past five years. “Jason is one of the best guides I’ve ever skied with,” says Leipham. “He will tell you about the features at the top of the run. He always shows you the goods but more importantly, I always feel safe when I’m skiing with Jason.”

If you’re looking for a place to lay down some epic powder turns this winter, check out the operations near Nelson, BC. This is the year! More info at NelsonKootenayLake.com. (Bob Legasa)