Our paddles moved together in practiced rhythm as we powered our Bellingham-based NuCanoe Frontier kayaks on phosphorescent water with the full moon’s glow at our backs, nearing our destination. Human lights came into view, two hours later than our stated return to Rodgers Fishing Lodge on Vancouver Island’s stunning west coast, where it stays light until 11 pm in mid-June.

We’d lost track of time on our last night on the island, reveling in the beauty and solitude of kayaking in protected waters an hour from the nearest port, Tahsis, which is just 4 hours from Vancouver’s Horseshoe Bay Ferry Terminal. Tiny Tahsis is the gateway to Esperanza Inlet and Nootka Sound, home to some of the finest salmon fishing in the world and vast protected waters perfect for kayaking and exploring – and all within one long travel day from the Inland Northwest. 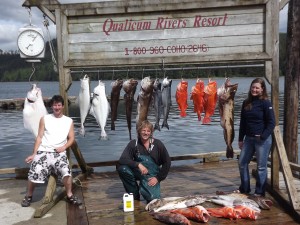 For several years, we have made annual treks to Vancouver Island’s wilds to fish and camp, but this was our first trip with kayaks and our first trip to the lodge. We spent our mornings on a 29’ fishing boat with a guide on the heaving sea catching a year’s worth of halibut and ling cod, but it was exploring the wild, closed-roaded landscape of the west coast of Vancouver Island that highlighted our trip. In three nights of paddling and hiking, we saw multiple sea otters and black bears and an abundance of aquatic life in the shallows around the many small islands we encircled on our treks. And without trying very hard, we caught nice rockfish and small lingcod jigging simple lures from our 12’ Frontier utility kayaks.

Before our late return to the lodge on our last night on the island, we’d paddled to a remote logging landing with plans for a hike, fire, and meal of fish we had caught that morning. On the paddle from the lodge, we’d watched two mature black bears crunch oysters and mussels at low tide. With our kayaks tied to the landing’s dock, we’d spend the evening hiking logging trails that offered stunning scenery, bird watching, and all-important passage through the island’s impenetrably lush and thorny vegetation. 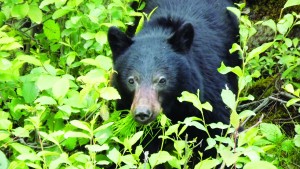 After returning to the landing from a four-mile walk, our plans for a fire and meal had been shredded like the foil packet containing china rockfish fillets, butter, citrus, salt and pepper we’d left behind at the logging landing. A black bear had paid us a visit. We always carry our Counter Assault bear spray, a must for sportsmen and hikers on Vancouver Island or anywhere predators are numerous and known to be aggressive, and ours were at the ready. Just on our short walk, we saw scores of piles of fresh bear scat and half as many piles of old wolf and cougar dung.

Vancouver Island is resplendent with predators – especially with large, coal-black black bears and an occasionally-aggressive cougar population. The island is also home to many wolf packs, including one reported to epicenter its activity in the area. In Tahsis, locals told us of seeing wolves in town on rare occasions, and of a steady stream of cougars, black bears, and missing pets. Super-abundant bald eagles account for lots of cat snatchings here, even dog snatchings, as evidenced by a disabled pug we met on a previous trip to the northern tip of the Island. The owners of the acclaimed Orange Tabby B&B in Port Hardy take their eagle-wounded pug for daily stroller walks.

Meanwhile in Tahsis, the owner of the highly rated Nootka Gold B&B kept her small corgi within feet of her at all times. Her B&B is a beautiful place to stay in a town of sparse accommodations. The lovely backyard hosts a little greenhouse, borders the forest, and has played host to a number of wandering critters. She, like any sensible person, doesn’t leave food or pets lying about….

Early in our return paddle to the lodge, we worked off our wine and the snacks bears didn’t eat by stroking powerfully against the tide. We made slow ground against its pull and felt it slacken as a full moon rose behind us above the peaks of Stratchcona Provincial Park. We tucked in against a small island whose shoreline led toward the lodge at the heavily forested island’s far end. Now, picking our way along the rocky backside of the small island with the floating lodge’s lights in sight and the moon behind us and phosphorescence in the water, the tide turned with us and sped us along into the lodge’s breakwater.

Traveling to Vancouver Island’s west coast is one of the most rewarding and affordable trips within a day of us. Lodges cost money of course, but there are boundless opportunities to camp for free and for small fees at beautiful campgrounds that are easily researched online. While there’s plenty to see and do on the island’s eastern inside passage, the west coast’s recreation opportunities are exponentially more numerous and in many cases better. Five major protected sounds along the island’s west coast offer excellent paddling and exploring opportunities.

Moving south to north, Barkley Sound is home to the Broken Islands Group – a world-class sea-kayaking destination. It’s flanked by the ports of Bamfield and Ucluelet, where we also visited this summer to paddle and fish with a friend from Nelson, BC, Kerry Reed of Reel Adventures Fishing (Reeladventuresfishing.com). We caught and released 45-55 adult salmon in one day on the ocean and got lots of halibut!

To the north, Clayoquot Sound is accessed via Tofino. Like Barkely, its mazes of islands harbor blacktail deer, wolves, and cougars that swim between islands. Kayaking and camping is extremely popular at Clayoquot, as is a large boat-in hot springs.

All of Vancouver island’s West Coast is awe-inspiring, but it gets wilder and perhaps more stunning the further north one looks. Nootka Sound offers a blend of services (Tahsis, many lodges) and remoteness, while Kyuquot and Quatsino sounds offer only scant services but a remoteness and quality of experience that’s tough to exaggerate to coast-loving adventurers. 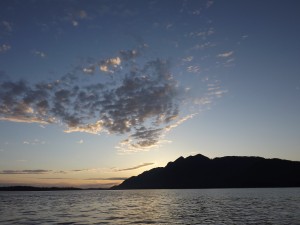 Like to see animals everywhere in the marine and terrestrial environments? Want to fish in the best fishery on the entire island? Make the drive from Port Hardy to Winter Harbour, protected water five minutes from the ocean’s splendor. Hike the Cape Scott Trail and many others, paddle kayaks on huge lakes and saltwater, and feel the embrace of strangely accessible wild aloneness. All-inclusive Qualicum Rivers Lodge and Resort is a favorite among many Inland Northwesterners, and Winter Harbour’s only store, The Outpost, is one of the coolest we’ve seen in the West. Mail a letter, fuel up, drink a bottle of your favorite and have a meal at the only public services within a 2-hour drive. // (Jeff Holmes)