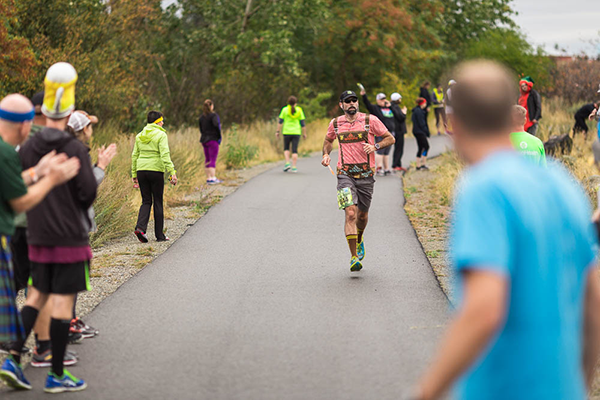 It’s simple math: local craft beer + running buddies + Centennial Trail = good times. This winning formula led to the birth of the Centennial Beer Chase in the fall of 2016. The event returns this year on October 7, with teams of up to six runners and a driver taking off in Spokane in relay fashion to the finish in Coeur d’Alene. Along the way, team members tackle 12 legs of 3-7 miles, each between craft breweries, for a total of 50 miles. Between stops for sips (and gulps) of samples at breweries, the inactive runners in the van will stop to support their team-mate with cheers, water, food and navigation help. At the finish line, all runners join in a mini Northwest Octoberfest of beers from all of the participating brewers. Here, the driver finally gets to sip her/his reward of brews for stewing in the smell of exertion for the past several hours as runners switched off and rode from station to station.

Megan McIntyre took part in last year’s inaugural beer chase and noted the unique team spirit of the event and the quality and number of local breweries participating. “The best part was visiting breweries I never knew existed,” she says. Runner Ken Zigler, who also participated on a Centennial Beer Chase team last year, says he will do it again for sure, adding that “most of the breweries had specials for us if we wanted more than the sample.”

What’s so special about a relay like the Centennial Beer Chase? Race organizer Scott Douglass says “Running is often a solitary sport, but in a relay, it’s all about your team. Teams are able to accomplish something that most people could not do on their own.” There are multiple divisions by age and gender as well as several corporate and group designations. Learn more and register at Centennialbeerchase.com. //