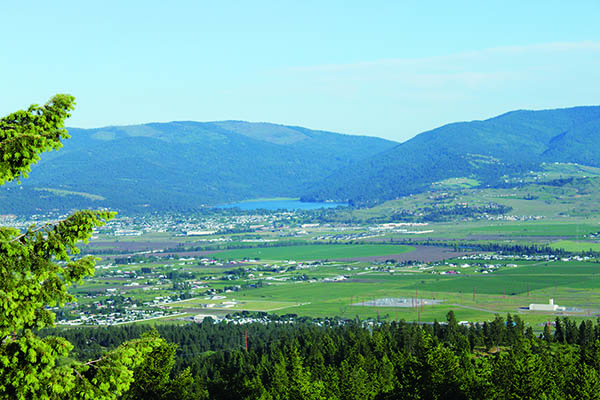 Big changes are taking place at Antoine Peak Conservation Area. Purchased in three phases that were completed in 2011, Antoine has long boasted a sizable trail system on its 1,076 acres. However, that trail system has always consisted of former logging roads, some of which were incredibly steep and heavily eroded. Spokane County Parks completed a trail plan for Antoine more than a year ago, and that plan has allowed for some of the steepest sections to begin to be rerouted. Since two portions of this trail didn’t exist until this spring, Canfield Gulch can be considered one of Spokane’s newest trail additions.

To get there, use the east trailhead on Lincoln Road in Otis Orchards. The west trailhead is undergoing major changes, too, including a brand new parking lot, so save that hike for a different day (see the November 2014 Hike of the Month for a description). From the Lincoln Road parking lot, take the main trail to the Conservation Area kiosk and bear left. The trail starts by climbing an old road segment, but at the top of the first hill the new single track contours along the hillside. The scar of the old fall-line trail will remain visible for the near future, and it is easy to compare the old to the new and appreciate the difference. What was once a lung-searing, calf-burning climb up an eroded scar is now contouring single track with fantastic views of the Spokane Valley to the south, Idaho to the east, and Mount Spokane to the north.

Just shy of the 1-mile mark, the single track rejoins one of the existing roadbeds to continue the climb toward the top. It intersects the Round-the-Mountain trail, another option for extending this hike, but the direct route currently leads straight up. This section will eventually be rerouted, but in the meantime, it’s a tough climb of approximately a quarter mile to get back to the new single track. The final segment was not completed until late July, so this is brand new trail for exploring! The reward at the top is one of the best views of the Spokane Valley and Otis Orchards. Look for Liberty Lake tucked into the hillside across the valley. Then retrace your steps to return to the trailhead. Round-trip distance: 4.8 miles and 1,323 feet elevation gain. Multi-use trail open to hikers, bikes, and equestrians. Dogs must remain on leash at all times.

Getting there: Take Trent Avenue east, continuing beneath the overpass near Otis Orchards. Turn north on Campbell Road. Continue 1.6 miles, then bear west on Lincoln Road. The parking lot is signed on the south side of the road in approximately a half mile. //

Holly Weiler is an avid trail runner, backpacker, and hiker. She is the race director for the Foothills Scenic Five fun run every June that supports a scholarship fund and community events.