Amongst serious skiers, hearing a ski resort described as “family friendly” is, if not the kiss of death, the kiss of disinterest. The skinny on Kimberley Alpine Resort, in British Columbia’s East Kootenays, is that it’s family-friendly. But watching skier Steve Blake, who grew up skiing this mountain, launch a 60-foot high-speed spread-eagle jump off one of the resort’s blue runs, one thing is clear: it may be family friendly, but it’s also a badass playground.

B.C.’s Powder Highway includes the eight ski resorts, dozens of heli and cat-skiing operations, and luxury backcountry lodges that comprise the largest concentration of skiable experiences in the world. Kimberley will strike stateside skiers as the most like its south-of-the-border counterparts. As opposed to the ragged peaks of, say, Revelstoke or Kicking Horse, Kimberley is part of the relatively mellow Purcells and occupies a timbered prominence. In the absence of big-mountain bowls and steep rock faces, the key runs take advantage of the thickly-treed hills for high-speed thrills. 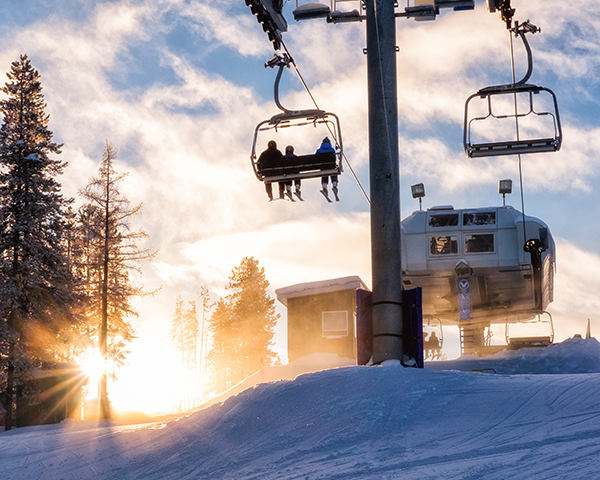 The way to the top of the playground. // Photo: Aaron Theisen

Steep, fall-line blacks and long, cruiser blues make the most out of nearly 2500 feet of vertical; a mid-mountain roll gives skiers a chance to rest their quads. But it’s the trees where Kimberley excels; expertly spaced and nicely graded glades comprise roughly a third of the resort’s 1800 acres, and the resort offers the largest, glade-heavy terrain in North America. For a great example of this, drop into the Black Forest for top-to-bottom tree skiing, which is accessed from the fixed-grip Easter Triple. But that’s not to say there aren’t big-mountain views. Kimberley sits above the Columbia Valley, which boasts the most sunny days in the province, and Fisher Peak and its Selkirk siblings to the east frequently make an appearance.

Kimberley shines after the sun goes down, too. The resort offers weekend night skiing on the longest lit run in North America. And in the Bavarian-style town with its pedestrian-only Platzl, storefronts are strung with lights that invite evening strolls. Try stopping in at Pedal and Tap for hip pub fare and a large beer and wine menu.

Non-skiers or those taking a half-day break from the slopes can ice skate at the outdoor skating rink or rent a fat bike to cruise the Trickle Creek Golf Course, where snow-packed cart paths cruise past aspen groves and open forest.

Big-mountain accommodations belie the resort’s small-hill charm. In the base-area plaza connecting the North Star Express quad to the Stemwinder Bar & Grill, classic-rock radio gives way to live music every weekend night during the winter. On-mountain accommodations at Trickle Creek Lodge and Mountain Spirit Resort nearby ensure the après-ski can easily continue well after last chair; the latter’s two-room condos and 30-person hot tub accommodate family gatherings and guys’ or girls’ ski weekends. Like so much else here, the accommodations prove that “family friendly” need not be a compromise. //

Aaron Theisen is author of the forthcoming “Day Hiking Glacier National Park and Western Montana” (Mountaineers Books). He wrote about avalanche awareness for the December issue.