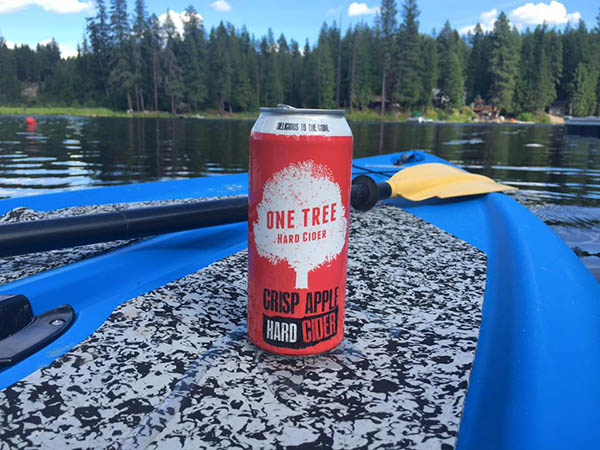 It tastes like a caramel apple at the Spokane Fairgrounds without the sticky mess. Perhaps One Tree Hard Cider was aiming for an apple pie flavor, but the caramel in the hard cider overwhelms the cinnamon. Altogether, it’s sweet and delicious, and it tastes great with a backyard barbecue meal.

Washington apples rate among the best in the world, and it’s only natural that One Tree Hard Cider would capitalize on the local crop. Co-founder Grant Barnes says, “We buy apples from all over the Yakima Valley. Most importantly, everything comes from real fruit, no extracts or syrups.”

The Caramel Cinnamon has been a favorite from the start, and it’s in constant rotation at the One Tree headquarters. Initially, One Tree was trying to create a mulled cider taste, yet similar to apple pie. The first few batches were a big hit with friends and family. They had fun making an actual caramel sauce and adding it to the recipe. Barnes recalls it took about ten to fifteen batches to get the recipe to where it is now. Now this cider has an ever-growing fan base, and it’s among the most successful ciders in the Northwest.

When asked about the One Tree name, Barnes smiles and says, “This is terrible. My wife says I should come up with a clever story for this. I knew I wanted to make this a hard-cider business in its early stages, but it lacked a name or brand. I had maybe fifteen other names kicking around. During a nice summer day mowing the lawn, I stared at the one tree in our backyard. It’s not even an apple tree! But it’s a really nice tree, and I blurted out One Tree. While lacking in story, we believe that it stands for real cider and nothing artificial.”

One Tree is committed to taking hard cider in new directions, and everyone agrees they’re a great alternative from bitter or hoppy craft beers. After you try the Caramel Cinnamon cider, make sure you try One Tree’s Cranberry and Lemon Basil ciders. Find out more at Onetreehardcider.com. //