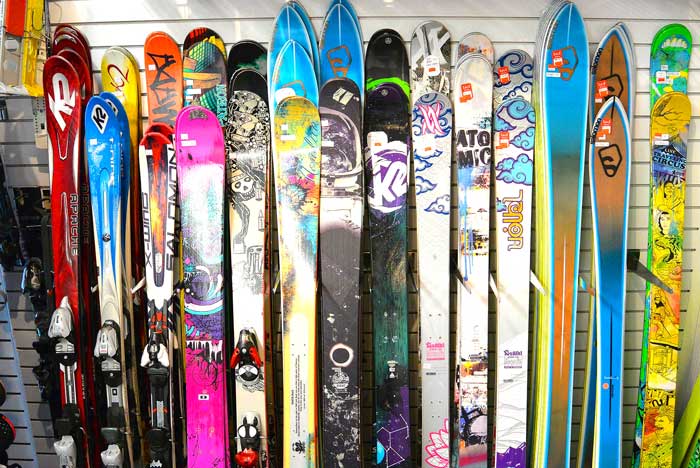 Brad Naccarato spent 3 seasons in Colorado as a certified alpine skiing instructor and has a combined 10 years of ski retail experience here in the Inland Northwest. In the next several issues of OTM, Brad will be offering tips on how to wade through the many ski binding, boot and other ski gear choices out there.

So you’ve finally made the decision: You’re ready to make the jump into a new set of boards.  But staring at the ski wall at your local retailer is proving to be a very intimidating experience and the tech-talk that’s coming out of the mouth of the salesman is flying over your head faster than Lyndsey Vonn at the World Cup.  Not to worry – I’m going to cut to the chase and make this process as simple as possible.

What length am I supposed to get?

Try not to let ego get in the way here – many great skiers prefer both longer and shorter skis.  If you have no idea what you like, sticking with something that is forehead height is usually a safe bet.  There are pros and cons to both short and long skis.  Longer skis have a large GS style turn radius, are stable at speed, and provide more surface area for greater float in fresh snow.  On the down-side, they can be hard to manage in moguls, trees and anywhere that quick maneuverability is needed.  Shorter skis are light, quick, easily maneuverable, and are great for making short snappy slalom turns.  You will however sacrifice overall speed by reducing your running surface area on the snow.  Additionally, you will also lose some flotation in fresh snow.

Why is everything so much wider than it used to be?

Skis with lots of surface area from tip to tail are the sexy sellers right now for retailers.  Fat skis are loads of fun in powder but can be challenging to control on hard-pack if you’re not a strong skier.  You have to be realistic about the places on the mountain you plan to ski.  If you’re still trying to perfect your turns on groomed runs, walk past the fat boys and take a look at the skis that are narrowest in the waist. The waist dimensions are the most telling of a skis personality.  If you’re getting dizzy trying to process all the dimensions, just focus on the waist.  Skis are generally placed into 3 categories based on waist measurements:  <80mm = carving/hard snow skis, 80-100mm = all-mountain, >100mm off piste/powder.

What’s all this talk about rocker?

Rocker technology is the most noteworthy advancement in ski design since shaped skis exploded in popularity in the 1990s.  Rocker is essentially an upturned ski tip (much more than traditional ski tips) that mimics the attributes of a water ski, enabling a skier to skim over the snow with minimized risk of catching an edge.  Rocker offers skiers several advantages including:  improved flotation in powder, greater maneuverability, and quicker turn initiation.  The benefits of rocker  are felt most in off-groomed scenarios but rocker can benefit any skier, from novice to World Cup champion as the technology is now incorporated into most skis on the market.