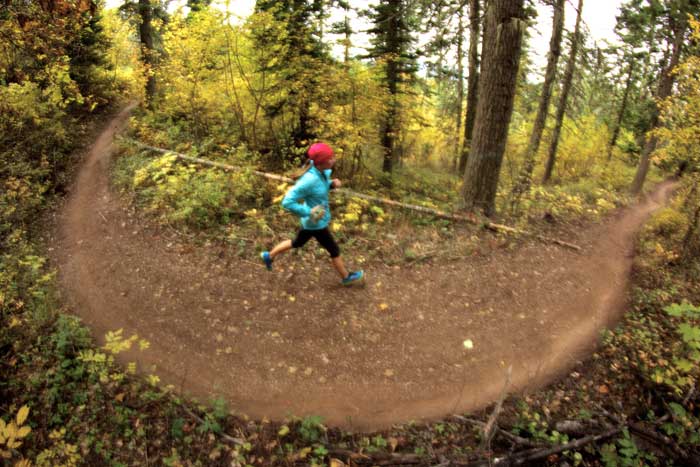 It’s not many an endurance runner that can claim to have kept all their toenails.  Apparently, losing toenails is akin to a hard-earned badge of honor in the running world.  I used to think it was awarded only to the most hardcore ultra-running junkies, with thousands of miles logged in soggy socks, toes slammed into their shoes for hours on end.  And then I ran the Canfield 9’er.

Nine as in nine miles.  There was a half marathon too, for the price of an additional toenail, I assume.

The Canfield 9’er is part of a race series put on by Ironcore Racing that begins with a 5K and ends with a 50 miler.  I’m not sure I have enough toenails to sign up for that one, but even if I lost them all, it would be worth it.

At the starting line there’s an old-school runner wearing white basketball socks halfway up his shins, some shorts that may have belonged to Prefontaine, and possibly some bifocals.  I hear him negotiate a last minute bib price with race director, Toby, whose clear priority is making a good time accessible for everyone.

Everyone who likes mountains, that is.  I’ve never run Canfield before, and though I think the word “field” in a mountain name is rather misleading, I had the good fortune (or bad omen) of seeing a map before the run.  It is not a course for flatlander sissy folk.  Or people with pedicures.

It is, however, a course for the trailophiles.  It is a course for any runner who ever got to the top of a hill and loved it.  It’s a course for those of you who like rocks and roots and views and trees, mud and tight corners and steep climbs and sketchy descents and adventure.

The handful of above described people (or unsuspecting road runners) gathered at the starting line on a crisp autumn morning.  There was a brief description of the course including lots of terms like “hard left” and “tough incline” and “medical personnel.” I checked my stash of Dora band aids, stuffed a gel in my pocket, opted for singing birds instead of tunes, and then waited for the countdown.

I have the impression that the trail running community is a rather embracing one.  It’s not often that you make a half dozen new friends in the first mile of a race.  Somehow, in the trees, on the trails, the common ground instills a camaraderie so palpable that even the ceaseless four mile climb seemed, dare I say, pleasant.

The course wound about on a fire road toward an unseen but much anticipated summit for what seemed an eternity of rock-dodging and wash-out leaping.  I tried to catch a glimpse of the spectacular views but every time I lifted my eyes from the trail, I caught my foot and did one of those arm-flailing desperate attempts to save myself from a face plant.  By the time I reached the summit, I’m pretty sure a few of the runners behind me had diagnosed me with some kind of palsy.

Whoever designed this course is clearly a person who loves running.  He/she is not just a runner but a person who climbs hills and leaves just enough in the tank to run pell-mell like a mohican maniac right back down it.  It is a person who smiles so much when they run, they have to floss the bugs out of their teeth afterward.  This course was designed for the joy of running.  Race bib or not, we were here to play.

The fire road turned into winding singletrack, technical turns, puddles for jumping, flats for stretching out the legs, climbs for cursing.  And all this to the backdrop of bright fall colors and endless blue skies.

I barreled down that mountain like I was a kid all over again, broad grin on my face, wind in my hair.  Maybe that’s what we trail runners are all about: The feeling of reckless playfulness.  Only as adults we temper it with how good our health care coverage may or may not be. It never gets old, and though my legs may get tired, I keep coming back for more.

The trail met again with the road for the last mile – a treacherous, toenail-sacrificing, ankle-rolling, blissfully fun descent to the finish line.  On that last stretch to the finish, for the first time in my racing life, I was thinking, “I wish this wasn’t over.”

A while later, I saw the white socks, now blood-stained, cross the finish line.  Behind glasses and grey hair there was a twinkle of the eye and the smile of a child at heart.

Canfield Mountain Series has a 25k, 50k, and 50 mile race on November 9th.  To find out more, visit www.ironcoreracing.com