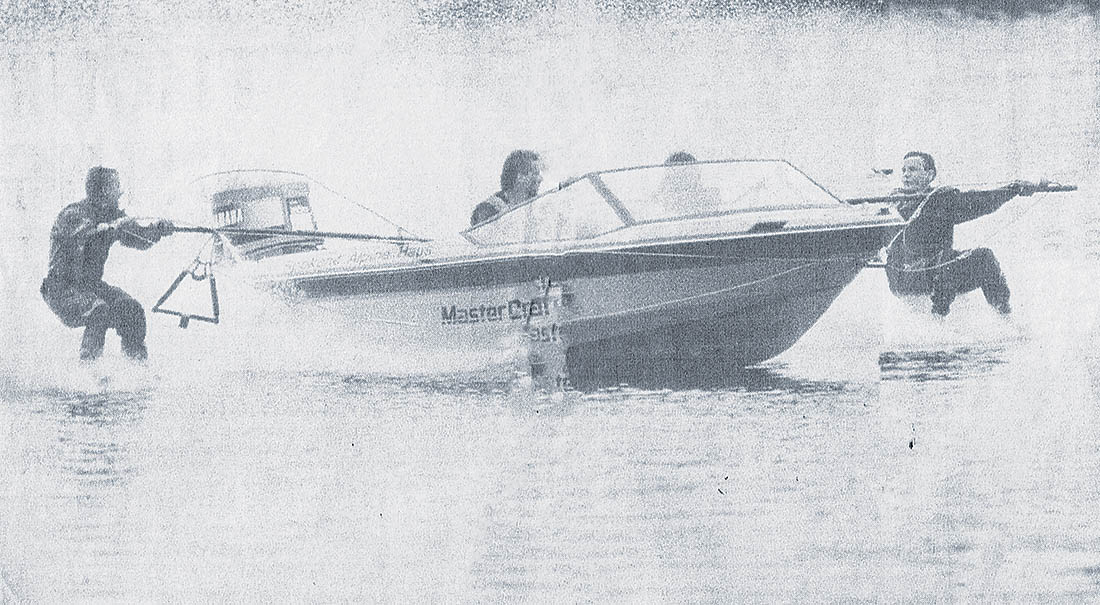 In the late ‘80s, near a now-defunct riverside restaurant called Shenanigans, a niche group of locals started jumping off the bridge into the Spokane River, bruising backs and spraining necks in the process, all in the name of learning a new sport: barefoot waterskiing. They “scorpioned” when their form strayed, face planting at eye-lid-peeling speed. They’d started out on surfboards then ditched the boards mid-run to ski on their feet, and eventually their barefoot starts progressed to running from the beach, jumping off dock pilings, hucking off rocky cliffs, and jumping off bridges into the river. At some point someone said, hey—let’s put on a show.

That someone was Vince Zimmer, who created the first Spokane Water Ski Festival in 1987. The show featured barefooters like Ron Mael and Alan Shepherd—the aforementioned bridge jumpers—who were the show’s opening act. The first year of the festival, Zimmmer brought professional slalom and trick skiers to town. He included an act from the Newman Lake Junior Ski team, who formed a human pyramid on water skis. He flew up a husband and wife duo from Cyprus Gardens. He contacted the local paper, television, and radio. He lined both sides of the river with large grandstands.

That first Friday night, 10,000 people came to the show. “I just dreamed it up,” says Zimmer. “Being exposed to the water ski show in Cyprus Gardens, I thought, god, I wonder if we could pull that off in downtown Spokane.” 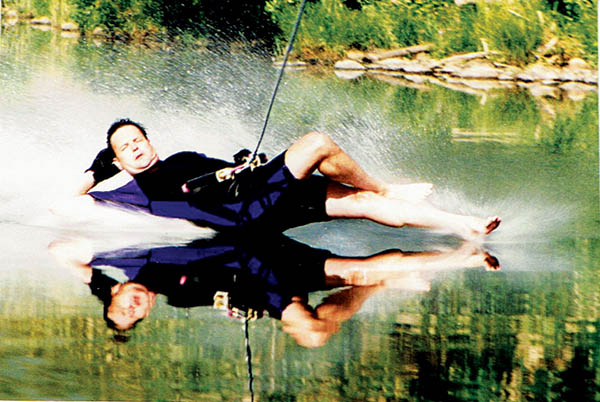 Alan Shepherd in a tumble turn.

“It was a glorified deep water start,” says Shepherd. “You’d hit the water and go wham—you’d go quite a way into the water from 30 feet up—and then you’d arch your body backward to create lift and come up and get up to speed. You’d take your feet off the rope and go.”

The jump was a crowd-pleaser, as many of the folks lining the grandstands hadn’t watched the barefoot technique before, let alone seen someone jump off a bridge. As for Mael and Shepherd, the opening act was one of the first times they’d seen a bridge jump too. Their usual method of practice was to try a jump and then try something bigger.

“We’d basically find anything to jump off that had deep enough water we wouldn’t die,” says Shepherd.

“We used to see some pros do it out of a helicopter from 80 feet, but we didn’t have a helicopter,” says Mael. Luckily, perhaps. The Division Street bridge was the highest barefoot jump the duo ever did.

“The bridge was the highlight,” says Shepherd of his barefoot career. “Doing that in front of 10,000 people when people had never even seen barefooting . . . we were kind of famous for a few days.”

The first time Shepherd tried the bridge jump, he landed slightly sideways and missed the padding of his barefoot body suit, resulting in a straight-edged bruise running the length of his back. He shook it off; it was one of many bruises in the catalog of learning that came from teaching himself the sport.

To help hone his technique, Shepherd bought what he called the Barefoot Bible—a book on technique by Ron Scarpa called Barefoot Water Skiing: An Illustrated Guide to Learning and Mastering the Sport. He and Mael went to the water nearly every night of the summer to practice, often recording each other on video so they could study their form and improve.

“We beat the crap out of ourselves learning how to do it on our own,” says Shepherd. “Which is why I have a bad neck.” Once the Barefoot Bible became tattered from studying, they brought Ron Scarpa to town.

“We were lucky that the sport was young enough that we could get the best guy in the world to come up, stay at our house, and train us,” says Shepherd. “We’d get 10 or 12 guys together and learn from the best. We were starstruck. Everything he did was so effortless.”

One challenge of barefoot skiing is combating waves, something traditional water skiers don’t have to worry about in the same way. 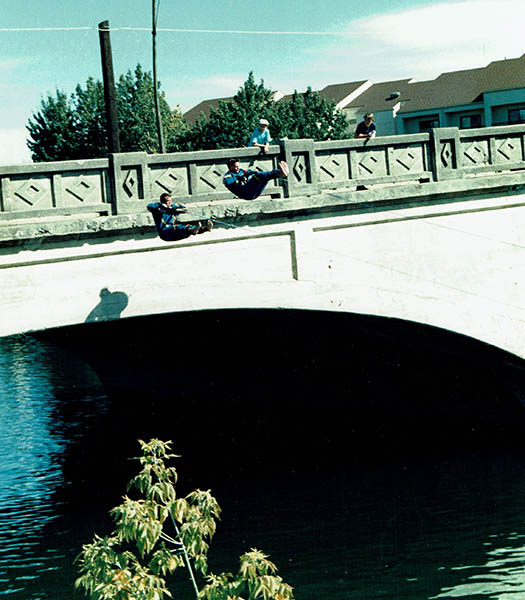 “Your feet are little, the waves are big, and you’ve gotta skip through them. Calm water—glass—is our goal,” says Shepherd, who’s pictured posing during a tumble turn on those glass-like conditions. “We’d go out on the whip, sitting on our butts on the corners, at around 75 mph. It’s funny, that’s probably the easiest trick we ever do.”

“It’s not like you could get on YouTube and watch a video like you can now,” says Mael. They learned by taking punishing, whiplash falls and trying not to repeat the effect.

“Your feet would hurt, so you’d go down on your butt and rest your feet,” says Shepherd. “Barefooting takes every muscle you have. It’s more about bare-bodying. You never just stand, you’re moving back and forth. Sometimes you’re up, sometimes you’re down. The longest run we’d ever take would probably be three to four minutes.”

Mael taught Zimmer how to barefoot one afternoon, but it didn’t stick. “I said, I’ll never have to go to a chiropractor again, because I cracked my back so hard when I planted head first and my body went over the top,” says Zimmer. “I thought, I’m going to stick to hang gliding. It’s safer.”

As Shepherd and Mael practiced barefoot back-to-front transitions, Zimmer saw the growth of the sport in the gear industry as he worked at the Spokane Alpine house. By 1985, just two years before his inaugural Spokane Water Ski Festival, he was selling MasterCraft ski boats. He saw boats come to town with specific bars for barefooting.

The festival—and all waterskiing near downtown on the Spokane river—came to an end when the Division Street bridge went under construction, sending scaffolding down into the river that blocked the thru path for motor boats. A few years later, the Centennial Trail was built along the river, removing the popular boat launch of the day. An event that Zimmer had hoped to be an annual show, like Bloomsday or Hoopfest, came to an end.

“You look at your life in chapters, especially at my age—I’m almost 67—and that chapter of those three years of the festival was so fun. It was something we just worked so hard at and came together to do. It’s something we old guys talk about now,” says Zimmer.

Shepherd and Mael still barefoot, though a bit less frequently now. Mael heads down to Arizona to do some barefoot skiing with his daughter, who’s on the ASU water ski team. Shepherd has transitioned to downwind paddle boarding on the technical, wind-driven waves of Hood River. He still has the Barefoot Bible, the illustrations that taught him how to deep-start from the bridge a bit faded, but familiar.

Though the grandstands are gone, the glassy stretch of water that was popular for barefoot tumble turns is used today by paddleboarders and kayakers. You can get out on downtown Spokane’s urban river playground with your own watercraft or a rental from FUN Unlimited, which rents boards under the Division Street bridge. The next time you drive across or paddle under the bridge, imagine a barefooter leaping from the railing—eying the speed of the boat, timing the hit of the water, muscles operating under hard-earned muscle memory to push forward for another round, another trick. //

Lisa Laughlin is a freelance writer and editor. She wrote about trail running in the June issue. She hopes to spend many days on paddleboard this summer.