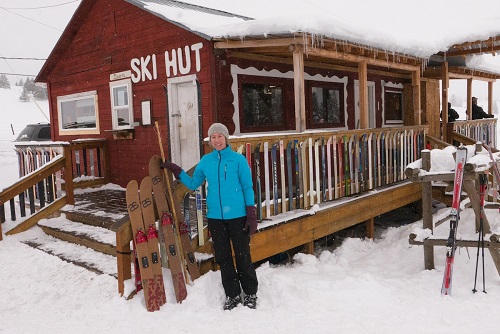 Altai Skis, the guys that make the ski/snowshoe hybrid the “Hok” as well as other snow sliding gear, is having a demo and ski day at Sitzmark Ski Area, probably the smallest most retro ski area in Washington and maybe the whole Northwest. The area is close to the Altai Skis world headquarters near the Canadian border in Curlew, Wash. and has an incredibly laid back atmosphere. It is a ski area for locals and a great fit for an Altai Skis demo.

Demos and activities will run from 10 a.m. until 3:30 p.m. We will have demos and lessons in Hok skiing (both up and down) and will offer discounted lift tickets for those interested in joining the Altai Skis program. There will also be a chance to try a Tiak and learn how to use it.  Altai Skis will also have a few pairs of Kōms, Altai’s backcountry touring ski, available to try along with lots of 3-pin boots for Hoks and/or Kōms.

Openning with a rope tow in the 1950s, Sitzmark now has a double chairlift and a rope tow. The terrain is a mix of mostly beginner through advanced intermediate with some nice open forest. The area is very kid friendly (rentals available). Altai will also have some Ballahoks (the kids Hok ski) available at the event.

More info about the Altai Hoks demo day and directions to Sitzmark here.