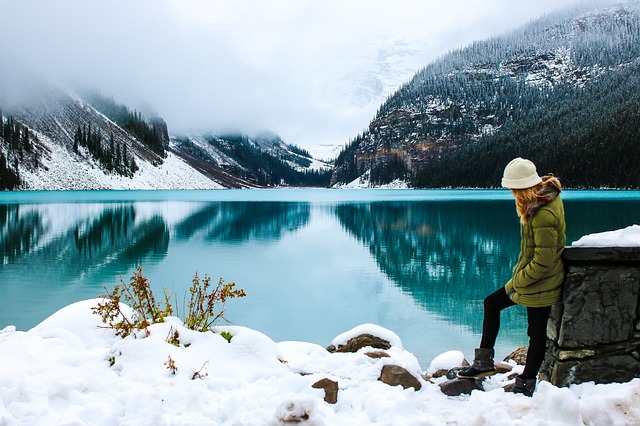 Autumn in the mountains means nature is restless and an endless summer can easily end on a moment’s notice with a snow storm ushering in another long, frozen winter. It’s a season when unexpected experiences should be anticipated. So we really should have been more prepared for a late-September day hike along a high-mountain stretch of the Pacific Crest Trail. Figuring it was an out-and-back and that we could turn around whenever necessary, we didn’t feel an overwhelming need to pack and dress for the dark clouds and cold temps that threatened to rain on our fall hiking parade.

Off we went, past retreating PCT thru-hikers who were bailing from the trail for a break from relentless rain and snow, up and up from Stevens Pass towards a lake we knew we would likely never see through the thick, low cloud cover. The farther we hiked, the harder it rained, until our boots and shoes began soaking up puddles like sponges, and my 90’s era outfit of long underwear and shorts felt like I’d been swimming through tarns in them. The rain grew more persistent and biting as we climbed and my hiking partner, who hadn’t been hiking since spring and was a bit out of hill-climbing shape (a fact I chose to ignore at the time), began dropping comments about stiff and sore muscles and other signs of an overtaxed body. I suggested she should drink more water, checked in that she wanted to continue, and we charged blindly ahead, lost in conversation and pulled along by the goal of reaching some destination (even if it was a picked-over berry patch).

Eventually, with the rain still pouring down on us, we splashed up the trail into an open forest with bushes bursting with over-ripe, jammy huckleberries. As we wandered around plucking finger-staining fruit, our bodies cooled and I noticed how cold it was for the first time. Looking up at the trees above our heads a full-on blizzard of snowflakes was pounding the branches 30 or 40 feet up. After a few more mouthfuls of berries, we began sloshing our way back down the trail.

We ran and walked off the mountain in an unrelenting downpour, with the snowline chasing us as we alternated between trotting, and, in the case of my hiking partner, limping down the trail, with each step sending spikes of intense pain shooting through new parts of her body. We were both dangerously cold and soaked by the time we reached the trailhead. By then, one of us had spent the last two miles pushing beyond reasonable limits and suffering the consequences. The other worrying and wondering how I had failed to be more aware of our limitations or bring standard shoulder season gear and survival essentials that would have become critical had the situation taken an unlikely turn for the worse.

Back at the car, heated seats and dry clothes never felt so sweet, but it took a good five minutes for my hands to warm up enough to open a beer, and another two hours and a long hot shower to feel warm again. My previously struggling partner, on the other hand, bounced back much more quickly. Hiking in the mountains in the fall, and even suffering a bit, can be exhilarating, but poor planning and communication, and dressing like you’re going to a Pearl Jam concert, isn’t the best recipe for fall hiking success. //