A Long Run With Good Friends: Riverside 24-Hour Relay (May 30) 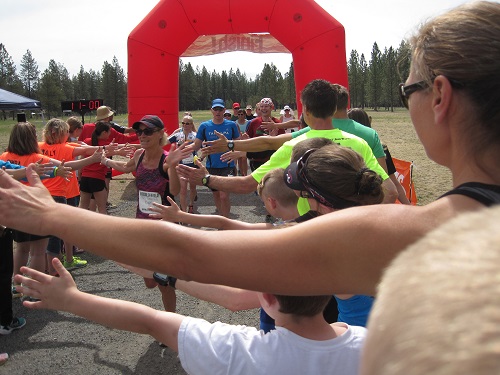 I completely understand why relay races, such as Spokane to Sandpoint, are gaining traction and increasing in popularity. But I believe the genius of a relay race with laps at Riverside State Park is better for four big reasons. First off, after your run, you don’t have to climb into a van or SUV that smells like sweaty socks to reach your next relay station. Second, a loop in the State Park is much more convenient for family members to support and cheer for you. Third, there’s more opportunity for camaraderie with other teams because everyone stops and starts at the same point. Fourth, at the end of the race, the single exchange station eliminates the need to shuttle back to the start or return your teammates to their cars.

Riverside State Park is a trail running mecca, and the six-mile loop is mellow compared to other local trail races. Since some teams dress up in costumes or funny face paint, the base camp maintains a positive, party atmosphere late into the night. I had a great time last year because I treated each lap like the next chapter in a good book, and I loved the whole relay from beginning to end. Put a team together and sign up for the Riverside 24-Hour Relay! //