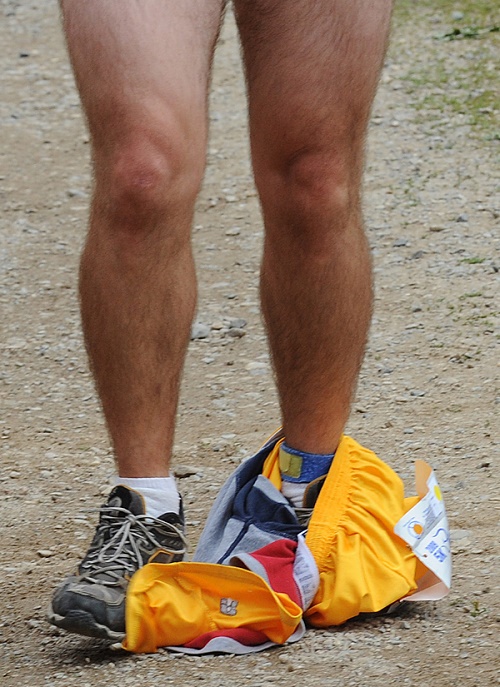 The 30th anniversary of the Original Bare Buns Fun Run, held at the Kaniksu Ranch Family Nudist Park that is celebrating their 75th anniversary this year, happens at 9:30 a.m., July 27. Like Bloomsday, this is another Spokane area run with a long history. Except you can run this one without your clothes.

Understandably, the idea of running in the nude is outside most people’s comfort zone. I initially felt that way when I contemplated doing the run five years ago, mostly because I was concerned about running into someone I worked with. Fortunately, that didn’t happen.

The Bare Buns Fun Run is clothing-optional so you are free to wear whatever you like. The difference is in the T-shirt you receive after you cross the finish line. Nude finishers get a “Nude Finisher” shirt. Everyone else receives one that says “Finisher.” In order to qualify as a nude finisher, you only have to be nude when you cross the finish line – not during the entire race. Quite a few people take advantage of this and strip down just before the end.

I ran in the 25th anniversary race five years ago, mostly on a lark because I had recently taken up barefoot running and thought it would be cool to do the race completely nude. While waiting for the start, I stood around dressed in my running shorts, t-shirt, and shoes. As more people gathered in the start area, I started feeling out of place because few others were wearing anything but shoes. I thought it was humorous seeing nude runners wearing Garmin watches and heart monitors, especially for a 5k.

I finally took the plunge and disrobed, folded my clothes and set them on top of my shoes. Now I was noticeable. Not because of the contrast between my tanned arms and legs and pasty white middle, but because I was barefoot. A few people took notice and commented, but they were the same type of comments I get at any run when I’m barefoot.

Years ago I had a friend who would joke, “Let’s all get naked and sit around and criticize each other.” The point being that we’re all imperfect, and it’s easy to point out the flaws in others. None of us can live up to the fashion magazine standards of beauty that can only be achieved through digital intervention. And standing around naked in the middle of a bunch of other naked people, I was surprised to find that the last thing on my mind was that we were all displaying all of our imperfections. No, we were here to run a race.

A cannon fires to start the easy 5k out and back on a packed dirt road course. The turn around point is crushed rock, but it’s fine if you’re wearing shoes. The crowd at the end cheers for all the finishers, and you collect your finisher shirt right away. It’s over before you know it.

There are awards for the overall top three male and female finishers and by age group and gender. A team award was started a few years ago and the Flying Irish have been taking that every year. The BBFR is a bargain at $18, but there’s a $10 late fee if your entry isn’t postmarked by July 5. Give it a try and you might be surprised at how much fun it is. Kaniksufamily.com. //