The eighth annual 24 Hours of Schweitzer is an all-day, all-night fundraiser held in honor of 9-year-old Hank Sturgis of Sandpoint and others suffering from the rare, fatal disease cystinosis. This year’s theme “Rock Around The Clock” will feature DJs and bands from around the area that will play throughout the event while skiers and snowboarders ride around the clock. The event has two categories: the 24 Hour Challenge category with three or four person teams participating in fun “challenge” activities and the Endurance category, which is an all-out solo or 2-4 person team attempt to ski or ride as many runs as possible in 24 hours. Teams will ski and ride for prizes, bragging rights and most importantly, fundraising for cystinosis research and Hank’s future. The event starts at 8:30 a.m. on Friday, March 25 and runs until 8:30 a.m. on Saturday, March 26. Skiers and snowboarders raise pledges and donations and see if they can endure a full 24 hours of skiing. The event welcomes young and old, casual or serious participants, and there are many ways to get involved – start a team, join a team, participate for one hour, participate for 24 hours, ski during the day, or ski all night. Those that don’t ski or board can pledge a participant, volunteer at the event, attend the auction or even donate an auction item.

Following the ski event is an auction/awards party on Saturday night, March 26, in Schweitzer’s main lodge (kids are welcome). The auction, which is open to the public, is expected to feature more than 100 live and silent auction items, as well as dinner and a costume contest tied to this year’s theme, “Rock Around the Clock.” Auction tickets are $45 and available at www.24hoursofschweitzer.com. The after-party, featuring live music, will be held from 9 p.m. to midnight at Taps in Schweitzer’s main lodge. 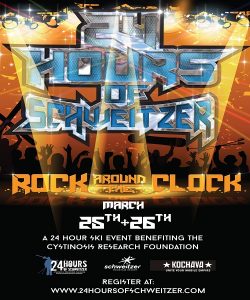 “Back in 2008, after recovering from our initial shock and despair, we had a single goal in mind – find a cure for Hank and others suffering from this devastating disease. After much discussion with family and friends, the idea of an all-day, all-night ski fundraiser was born,” says Brian Sturgis, Hank’s dad and one of the event organizers. “We never dreamed that seven years and thousands of ski runs later, more than half a million dollars would be raised toward the cause and that Sandpoint would become a nationwide leader in cystinosis fundraising.” More info at 24hoursofschweitzer.com. //