Camp. Hot-N-Ready. Photo Op. End of Single Track. No Bake Cookies. This is how my buddy Tyler Adams labeled the Google Map pins that outlined my first bikepacking trip, which wound us up and around North Idaho’s 5,600-foot Chilco Mountain.

We staged our trip in the parking lot of Two Wheeler Dealer in Hayden, Idaho, where Tyler and Gabe Reese—two of four total riding companions—both work. Tyler is a mid-30’s climber-turned-bike-enthusiast who recently started nursing school. His tattoos depict Calvin and Hobbs and a huge elephant on his lower leg, which was designed by a Spanish friend he met while living in Korea. Gabe is a 15-year-old trumpeter who performs in local symphonies. It was also his first time bikepacking, but clearly not his first time riding trails.

At 6 p.m. on a Saturday, right after the guys got off work, Gabe’s mom shuttled us up Bunco Road to the trailhead for Chilco Mountain. The climb starts immediately out of the parking lot, and there is no warm up grade—at least for a beginner. The National Forest (NF) road rises, until it gets even steeper and saunters to the summit via dozens of calf and quad-busting switchbacks. We hoped to make camp by sunset or shortly after. 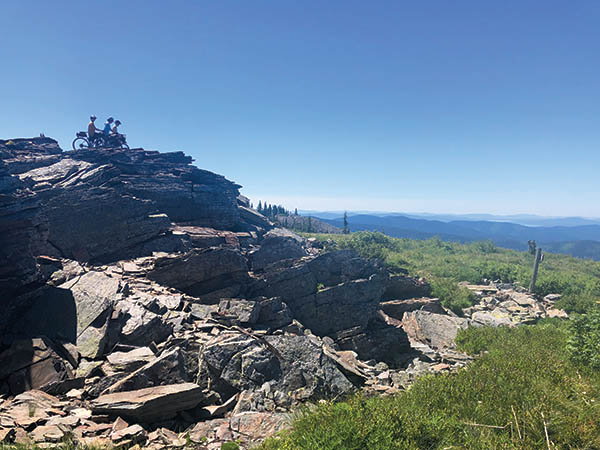 The first leg of the journey up NF 209 was classic North Idaho. ATVs and massive trucks blazed by us. Some people slowed down, while others aimed to feed us their dust. Gabe and Tyler cranked a bit ahead of me on their gravel grinders, and I settled into the lowest gear on my borrowed fat bike. The sun hovered just above tree line for what seemed like hours, as it does on long summer days, and shined a dusky light on the creeks and forest below us.

The heftier part of the trail gains roughly 1,500 feet over 1.8 miles. I was pretty sure I was going to make it, but I also knew it was going to hurt. My small bit of confidence came not from my innate riding abilities, but from my willingness to dismount my steed and push. Going slow was better than not going at all, and I had no illusions of grandeur for my first time out. I just hoped the grunt work and sweat would translate into some fun the next morning.

One thing that helped everyone keep climbing was how tuned in Tyler was to our bikes. He frequently dropped behind the group to do a quick inspection of our set ups, and then pedaled to catch up. “Your back bag is rubbing your tire,” he says to me about halfway up the NF road. I braked, and he showed me how to tighten the bottom of my rear seat bag. A short time later he asks Gabe if his seat was too low. “I’m not sure,” he replies, and they paused for a minor tweak. Gabe clearly knew a lot about bikes already, but I think both of us learned something from Tyler’s attention to detail: Small adjustments make a big difference over time; suffering should come from hills that demand hard work of your muscles, not from how your body is positioned over your bike. 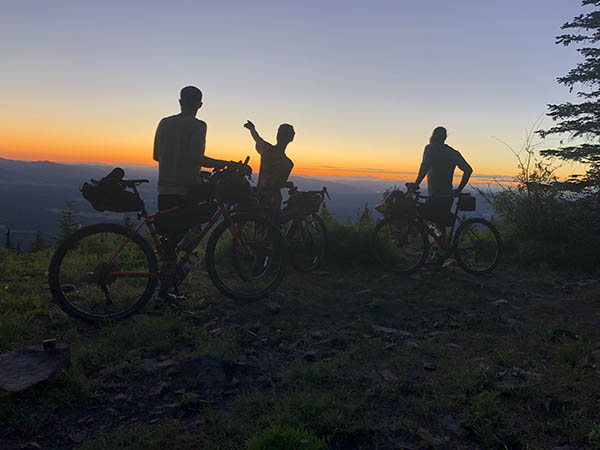 Tyler also checked in to make sure we were hydrated and regularly snacking. Playing the role of a cooler, older, and wiser brother, he was as tuned in to his own experience on the ride as he was into ours. This thoughtfulness makes people feel cared about, but I also think it plays another important role on a bikepacking—or any long distance— trip. Attention to the small things over which you have some control has a placebo effect: now that your bike or body is working more efficiently, you start betting on yourself that you can do this.

Soon it was time to put those adjustments to the test, and we started climbing in earnest via singletrack switchbacks. I pedaled as smoothly and calmly as I could, but I frequently lost momentum, teetered sideways, and resigned to push myself up hill. Sweat started pooling in my arms and lower back. Then it leaked into my eyes and down my neck and legs. Finally, I was working so hard that my entire body felt like a giant heart beat. As I hopped on and off the bike, depending on the steepness of the trail, I started daydreaming about the Little Cesar’s pizza the fourth member of our team—Matt Jones—had strapped to his front rack.

Fortunately, we had timed the uphill work perfectly and reaped the first of our rewards. The sun had barely set over town as we arrived at camp just below the summit. The sunset glowed in dense layers of vibrant color, ranging from shades of reddish-pink to midnight blue at the zenith. We left our bikes at camp and hiked quickly up the talus slopes to the south summit. Matt led the way with our Hot-N-Ready pizza, and I think we would have followed him anywhere. We crowded around the oily cardboard box and each grabbed a slice. The salty, fatty food lit up all the pleasure centers of my brain, and I felt like everything was suddenly right in the world. The last touch of light was sinking close to the horizon as we gazed toward Canada and Montana, and down at Hayden from where we had just come.

Once back at camp, we snacked on a few more provisions before stashing them out of reach from resident varmints. I rolled out my sleeping pad and bivvy bag and crawled inside. Trying to go small and light, I had ditched the sleeping bag in favor of a down jacket and a pair of leggings: a bone chilling mistake that I will make sure to correct on my next trip.

As it goes with climbing any mountain, after we woke up, much of the work was still before us. We enjoyed the first rays of sun, knowing soon the heat would beat down and melt sunscreen into our eyes. We sipped a few shots of instant coffee, packed up camp, and pedaled rolling hills for the first part of the morning, taking advantage of the scenic views by pausing for our photo op. Then, as we descended the north side of the mountain via Hayden Creek, the rollers gave way to steeper singletrack again. I experimented with the position of my body to counter the weight of my bags. I also learned how to balance with the pedals parallel to each other to better absorb the uneven terrain, how to pump rather than ride the brakes, and how fast I could go without totally losing control. 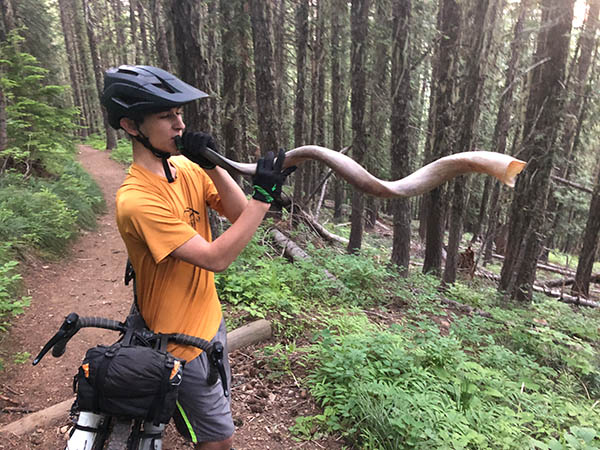 By the time I was starting to get the hang of it, we reached the end of singletrack. The most challenging part of the ride came next, when we had to ride the National Forest road then pavement to drop Gabe off at his house before riding the final stretch back to Two Wheeler Dealer. The last few miles were the longest slog, as the sun blasted off the hilly pavement, and my legs felt heavy, even on the easier terrain.

I know cruising down the steep slopes was supposed to be my favorite part of the trip. But despite the thrill of speed, and how heavenly the rushing breeze felt on a hot day, the downhill is not seared into my memory as clearly as the final pin on our map: No Bake Cookies, with milk and a side of chicken noodle soup. //

How to Gear Up for Bikepacking

Go to a local shop like Two Wheeler Dealer that has employees who bike pack. There you will find a wealth of information about what kinds of bikes will best fit your objectives. Buying a bike or gear from a local shop means you get the exact product you want the first time that’s fitted to you and your riding style. Here’s what I used on my first bikepacking adventure:

Summer Hess is the managing editor of Out There Outdoors. She last wrote about running the Amica Seattle Marathon in July.