The Mystery of a Mount Spokane Icon 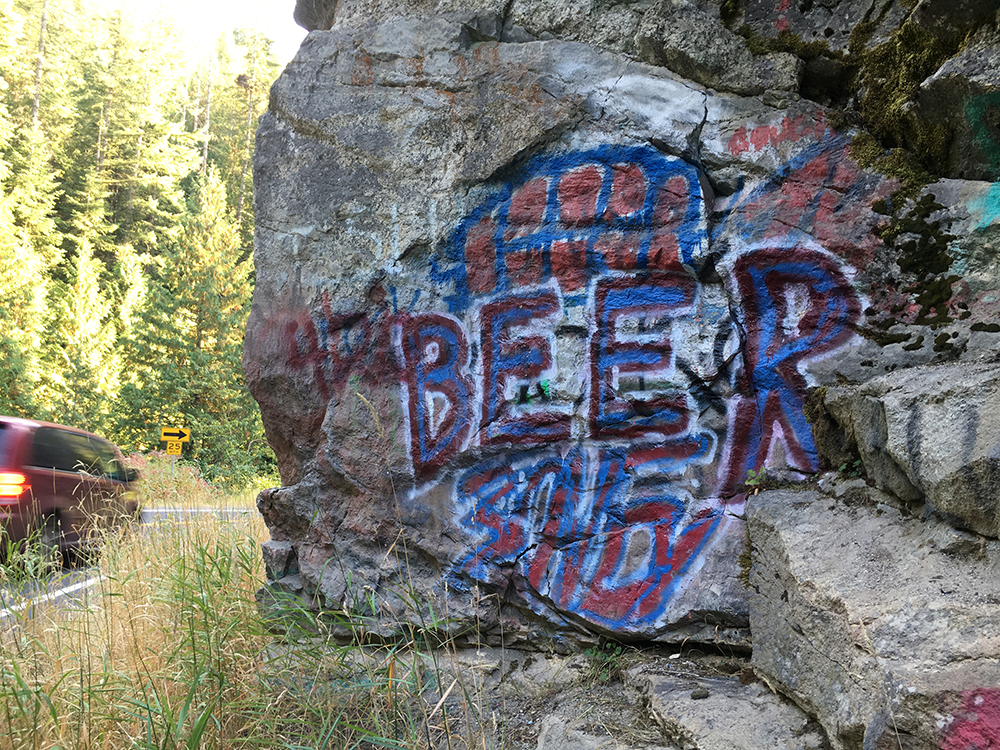 Your legs are spent from a long day lapping Rock Slides and Alison’s Way or from cross-country skiing the Outer Limits trail. Or maybe you snowshoed up to the summit to take in the 360-degree view from the Vista House. All of these endeavors deserve a celebratory beverage, but no matter how you enjoy Mount Spokane, you have to drive safely back to town again, which involves the long, winding drive of Mt. Spokane Park Drive.

After a day charging on Mt. Spokane, you head down and you think surely you have passed the last sharp turn and that the straights of Peone Prairie should be opening up in front of you. But instead, rearing up then around the next bend, there it sits: Beer Rock!

Beer Rock shines like a neon sign. Does the graffiti beckon you with what’s ahead, or is it a reminder of what you left back on the mountain? Was it the celebratory beverage after a backcountry tour on the backside or a frosty one served to you at the Foggy Bottom Lounge after slaying some pow, crust, slush, or whatever the mountain gave you that day. Was it placed there to make your eyes pop for a little bit longer or to serve as warning for one of the more dangerous turns?

The origin of the graffiti is a mystery steeped in local lore. Some say it has been there for decades, others centuries, and some claim it rose from the earth in a cataclysmic eruption with its signature graffiti already etched into its façade. According to one local skier, it was just a plain rock in 1969 when he first started skiing at Mt. Spokane and still a plain rock in 1972 when he first got his license and struck the rock with his dad’s truck. Other local riders have petitioned that this rock be a local historic marker sponsored by a “Beer Rock” appreciation club. It will honor all the cars that have left paint on it sides, to the vehicles towed out of the creek when they over corrected as the rock reared up on them, and for ski area garbage trucks eaten by its jutting protrusion.

With all outdoor pursuits, we should weigh the risks with the rewards. Beer Rock should be honored both for its imposing position and as a reminder of the good times had on the mountain and the many more to come.