The Ever Changing Radius 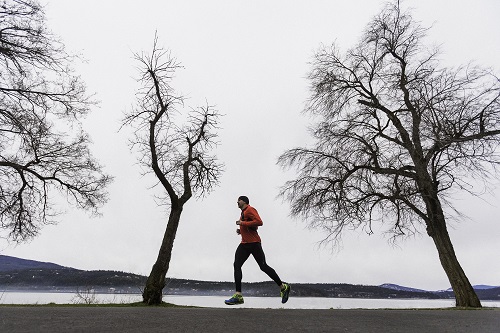 At age 18, to impress a girl on the track team, I went for my first run. Dressed in a ratty pair of gym shorts and a white t-shirt, I headed out. After a quarter mile, I stopped, turned around, and walked home. Sixty pounds overweight, I couldn’t run far. As I walked, I realized that I’d gone that quarter mile on my own two legs and this astonished me. Since I arrived at college, I had been living a sedentary life with lots of pizza and Office Space. But to go a quarter mile on my own legs, by my own steam? I was hooked!

As the year advanced, so did that quarter mile. I began to see my running ability, my health, and my weight loss in direct relationship to how far I could run from my house. The radius grew. By the end of the year, I had a four-mile radius, and I could run that distance out and back in an hour. Out and backs have a certain appeal because they measure, with the unflinching coldness of a clock’s second hand, whether I can get home as quickly, or quicker, than I’d reached the outer edge of my radius.

When I began training for a half marathon, and, later, a marathon, the radius moved from four miles to eight to ten. Then Ironman entered my world, and due to the biking, my radius grew to 40, 50, even 60 miles. There was a 125-mile bike ride with my uncle that pushed my radius as large as it will ever be.

This radius often fluctuates depending on my fitness and what I’m trying to do as an athlete. When I turned my attention to focus on the 5k, the cycling stopped and the long run shrank from 20 miles to 10, so my radius reduced to five miles. When I stopped racing and began running recreationally, the radius shrank again, down to about three miles.

Wherever I drive, I always consider whether my destination is within my current radius. I think, “This is nine miles from my house. It’s within my radius. I could have run here.” There is a unique liberty in this knowledge, a bold freedom, a heightened sense that my legs can carry me anywhere I please within my radius.

Last summer, my radius dropped dramatically over the span of a week. I hadn’t been feeling well. I was taking two-hour naps during the day and waking in the night covered in a sweat with soaked sheets. I’d drench my shirts during the day and need to change clothes. I was dizzy, at times delirious, often so weak that I couldn’t walk to the restroom on my own. My wife would lift me up (she’s 120 pounds; I’m 210) and guide me there. I found it ironic that this Ironman triathlete who once had a 60-mile radius could not make it eight feet to the toilet. When she came home from work to find me on the couch with a 104 degree temperature and a lump three inches wide on my neck, it was time to see a doctor.

After bloodwork and some scans, the doctor gave us a diagnosis: lymphoma. Pushed along in a wheelchair, too weak to walk on my own, my radius now zero feet, I returned to the hospital the next day. I had a core taken from my hip to test the bone marrow. After I collapsed and passed out on the way to the next appointment, I was admitted. Preparations began to initiate chemo. My liver was shutting down. My intestines were telescoping in on themselves. The doctor told us that if I had white poop, and if left untreated, I could be dead within 24 hours.

Our pastor was on his way with bread and wine when the doctor came to our room. “I don’t normally give people in the cancer ward good news,” she said, “but the good news is that you have mono.” It was the most severe case of mono the doctors had ever seen.

Upon hearing my new diagnosis, I wanted to get out of the hospital bed and go for a walk. I’d been bedridden three days, worrying about what the future would hold, but I now had an urge to move, however feebly. My wife again got under my arms, hoisted me up, and we shuffled to the end of the hallway, looked out the window, and then returned to my bed. I treasured the moment my radius increased to 20 feet.

Looking in the rearview mirror, I often think about how to tell this story. One way suggests the doctors are a bunch of incompetent fools who misdiagnosed me. I see this narrative when people tell me I should sue the doctors. But that version of the story is not generous enough. They are, after all, doctors with extensive training. They’re not stupid. Perhaps it’s more accurate to say the body is complicated, and that doctors do the best they can. This version recognizes the complexities of medicine and the good efforts of the doctors.

Or, perhaps the story is best told through one of my friend’s reaction to the news. He exclaimed, “Peter, that’s a fucking miracle.” //

Peter Wayne Moe’s last piece for OTM, “How to Write about Bikes and Cars,” was back in June 2015.