Locavores and foodies take note: Paul Roberts is coming to Spokane April 15-16th to talk about his newest book, The End of Food, for Eastern Washington University’s annual Get Lit! Festival.

After growing up on Orcas Island, Roberts now lives in Leavenworth and has earned notable acclaim as a journalist covering economics and energy issues.

In The End of Food, Roberts discusses the dilemma of the stark economic realities underlying our modern food system, and shows how our system for making, marketing, and moving what we eat is growing less and less compatible with the billions of consumers the system was built to serve.

It is, indeed, an unsustainable system—one that is characterized by chemically intensive farming, massive production and diminished nutritional value. This has led to various health epidemics—obesity, heart disease and diabetes. Moreover, it has brought humanity to the brink of a global food crisis where “nearly a billion people—one in seven—remain ‘food insecure’,” Roberts writes in his book’s prologue, “[T]he very act of eating, the basis of many of our social, family, and spiritual traditions —not to mention the one cheap pleasure that could ever rival sex—has for many devolved into an exercise in irritation, confusion, and guilt,” Roberts explains. “The very meaning of food is being transformed: food cultures that once treated cooking and eating as central elements in maintaining social structure and tradition are slowly being usurped by a global food culture, where cost and convenience are dominant, the social meal is obsolete, and the art of cooking is fetishized by coffee-table cookbooks and on television shows.

“On nearly every level, we are reaching the end of what may one day be called the ‘golden age’ of food, a brief, near-miraculous period during which the things we ate seemed to grow only more plentiful, more secure, more nutritious, and simply better with each passing year.” Throughout his book, Roberts explores the many complex questions and concerns of this daunting reality. For both this and his first non-fiction book, The End of Oil (published in 2004), he conducted extensive research and traveled to Kenya, South America, Asia and Saudi Arabia to view first-hand the problems of oil and food production. Recently, he and I chatted by phone as he traveled from Portland to Seattle. 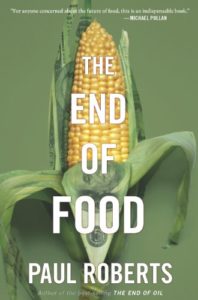 It’s another case study of what happens when you industrialize food, and confirms what people have been saying about the food system for a long time. It’s a business model that wants to consolidate production in large, centralized units and get the efficiencies of huge volumes moving through the system. And you have one company producing products for other companies in order to eliminate duplication of function. But when there’s an error, it moves through the entire supply chain, or supply web might be a better way to describe it.

The [people in the] safety community aren’t dummies – they know their stuff and that parts of the system are vulnerable. They look at the peanuts system model, but they’re constrained by the business model. De-industrializing our food system will be very expensive. We know what’s wrong; we just have to find a way to fix it, and to help the stakeholders.

How do you feel about the diminishing wild salmon population in the Pacific Northwest?

This is another example of a traditional food resource that we are discovering late in the game. As a finite quantity, all the natural systems must be in place for the [wild salmon] supply to replenish itself. It raises the question of the systems approach, especially when looking at food security. The ecological view is that food production is a system, whether you’re talking about an entirely natural system – like a field of grass—or an entirely manufactured system. Adding to the natural fishery with hatchery fish addresses the other parts of the ecological system —that is, if you allow the natural fishery to decline, it has to do with land use, economic growth and other factors.

The wild fish are not just a resource in themselves; they’re an indicator of how well the rest of the system is doing. The rest of the system is broken and reaching beyond the point of repair. Everyone who’s dealing with the issue of salmon population decline recognizes that you have to get all the stakeholders involved – the landholders, the municipalities and all the others.

What food product do you perceive as unnecessary or ridiculous, and which exemplifies the points of your book?

There is not one specific product, but there are categories that worry me—products that teach kids that food is a toy, that pull kids away from thinking about their food. Food should be fun, but it shouldn’t be a hobby. There are people who are foodies—who enjoy the creative and trendy aspects of food, and that’s okay. But when we’re encouraging kids to see food as an amusement with really bright colors and kits you make your lunch from, it’s disturbing.

What gives you hope for the future of our food economy?

This is going to sound cliché, but it’s the young people . . . who want to be farmers and want to try something new and complex. Many of today’s commercial farmers have moved away from complexity.

[Roberts points to Iowa State University’s sustainable agriculture degree programs and Professor Frederick Kirschenmann, who is also president of the Stone Barns Center for Food and Agriculture, in New York, as examples of hope.]

What would be your first request or cautionary piece of advice for President Obama and his Administration?

The agricultural community, who is smart and pragmatic, has a pretty good idea of what they would like to see happen. We might all agree that we need to reform U.S. farm policy and stop subsidizing farm practices that are dangerous, and start funding those that are better.

I would recommend that we start researching and developing again—allocate money for that. And research agricultural practices that will benefit us through the next 50 years – practices for water sensitivity and soil. That’s all really expensive, however, and may not get much attention because of the current recession. This doesn’t necessarily fit in with the other farm constituents who Obama is forced to deal with. So he’ll have to figure out how to bring the large, commercial sector along.

Obama must also deal with farm policy in the context of climate policy. Farming is one of the largest contributors to climate change and also one of the most impacted by it. We need to figure out how to help the climate along with the context of farming issues, like determining how helpful corn ethanol really is. Obama needs to have a farm policy that is different from other administrations. Michelle Obama is excited to make food and nutrition a more important issue, and that’s exciting because it hits people where they live.

I think if Obama can keep agricultural policy on the middle burner, and not on the back burner, that would be a good start.

As a Washingtonian, where do you primarily obtain your food?

I try to buy as locally as I can, which is easy because there is good produce where I live. I have a garden that I’m pretty dedicated to. It’s small, but I’m expanding it every year. I’m committed to being as self-sufficient as I can, within restraints—taking back some of the job of production, and making it my own responsibility.

But I like my salads in winter, so that means relying on the global food chain.

What are your favorite foods?

I’m really into salads. If I had an addiction, it would be these salads I make that are big enough for an entire family—but I could eat it myself. I have a horse mentality when it comes to salads.

[Writer’s note: In case you’re wondering, Paul is not a vegetarian.]

Paul Roberts will speak on Wednesday, April 15, at 7:30 p.m. in Spokane Community College’s Lair auditorium, for a Get Lit! evening co-sponsored by SCC’s President’s Speaker Series and the Hagan Foundation Center for the Humanities. He’ll speak again on Thursday, April 16, at 10:30 a.m. in the Hagan Foundation Center for the Humanities at SCC during an interactive Q&A with students and faculty. Both events are free and open to the public.

Amy Silbernagel McCaffree is digital editor and the "Out There Kids" columnist, and has been an OTO contributor since 2006. She grew up near Seattle and the western foothills of the Cascade Mountains, and has lived in Spokane since 2003. She enjoys camping, biking, hiking, swimming, paddling, and alpine skiing with her husband and their two children. She has a MFA in Creative Writing from Eastern Washington University. Her writing has appeared in various other regional publications, including poetry anthologies, "Spokane Coeur d'Alene Living" and "Spokane Business Catalyst" magazines, and the now defunct "Northwest Runner" magazine. Connect with Amy