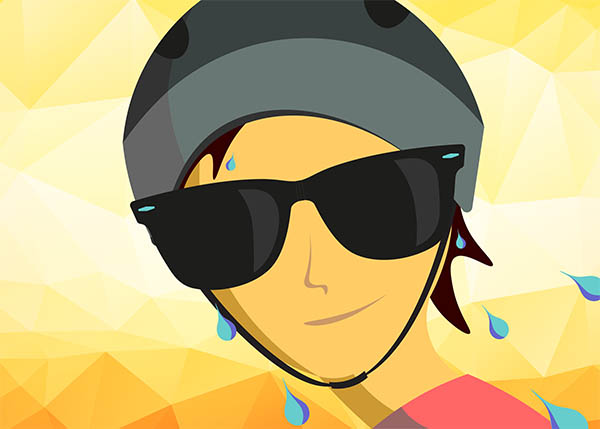 Many people struggle to wrap their minds around the logistics of bike commuting to work — and it often boils down to dealing with sweat. Commuting by bike makes your entire day better. It wakes up your brain, gets your metabolism going, and helps you focus all day. But the fact remains that it’s awkward to walk into a meeting sweaty, or to run into a co-worker first thing in the morning and try to have a conversation with big, salty droplets running into your eyeballs.

I sweat in places other people can’t even conceive of sweating. My knees sweat. The insides of my elbows. My shins. Being mortified by every bead of sweat on my face, pit stain, and clammy handshake held me back from being healthy and active until my early twenties. Once I did the math, it became obvious to me that letting our cultural weirdness about sweat define my life simply wasn’t an option: I was unhappy, unhealthy, and stressed. Plus, I didn’t have a car and needed to get to work.

It’s okay to sweat. It’s okay for people to see other people sweat. Unfortunately, that’s not how everyone sees it — and that’s a problem. Many would-be bike commuters genuinely worry about how showing up for work sweaty will impact their job. As long as we’re allowing stigmatization of people with moist underarms — and hands, foreheads, knees, hair, unmentionables, etc. — we’re also stigmatizing the active lifestyles that produce energetic, focused, and healthy employees.

According to WebMD, my number one source for medical advice and hypochondriacal panic attacks, sweating is good and natural, even if you sweat more than your body really needs you to. Excessive sweating is called hyperhidrosis. Though it’s nice to know my perpetual underarm glow is regarded as a medical issue, it mostly seems like a weird cultural norm, one with a gendered double standard. It’s somewhat more acceptable in many situations for guys to be sweaty and even a little stinky. I think it’s pretty sexy to have a functional autonomic nervous system, whoever you are. We sweat to stay cool. I mean, it’s right there: Sweating makes you cool!

Now that I’m much more zen about my tendency to perspire, my strategy for dealing with walking into a room sweaty after bike commuting (or, you know, doing anything but lying perfectly still in a dark, cool room) is just that: I deal with it. I own a lot of black shirts and clinical strength antiperspirant with the maximum amount of deadly chemicals in it. In the winter, I wear vests instead of jackets. Sometimes I carry my helmet into the meeting or office with me to silently signal that I’m sweaty ’cause I’m saving the damn planet. I do what it takes to make sure I feel comfortable, which mostly means I make sure embarrassing spots like armpits and nether regions don’t show sweat. And I don’t let it stop me from doing me.

An informal Facebook survey of my bike-commuting friends indicated that most of them bring a change of clothes for work and deodorant if their commute is more than a few easy miles. Some use showers at work and just get ready there instead of at home. Others shower before work, get sweaty, then quickly freshen up at work if they’re feeling clammy. Neesha Schrom, who works at Spokane Public Radio, takes it to the next level. “Keep some distance from coworkers. Avoid enclosed spaces,” she advises. Those are excellent life choices whether or not you’ve been sweating, really.

I’ve been fortunate and intentional about working at places that support active employees. But I’m fairly convinced if I didn’t, nobody would even notice I had a thin layer of dried sweat covering my entire body unless I told them. Because like Neesha says, who really gets that close to their co-workers? //

Erika Prins Simonds bicycles as her primary mode of transportation. She wrote about foragers and foodies in July. You can find more of her writing at erikaprins.com.