Stop Signs are for Cyclists Too 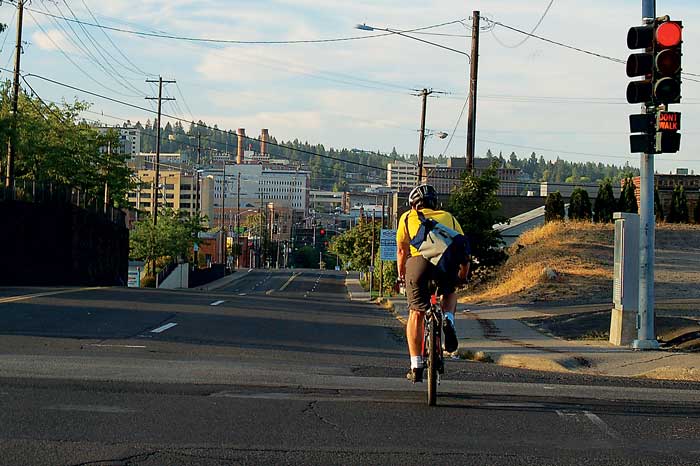 This year I took many different ways to and from work during my bike commutes. Consequently, I witnessed many instances where drivers and cyclists created unsafe situations for the person on the bike.

Drivers: When a bicycle pulls up to a four-way stop let them take their turn like everyone else. When you skip your turn and wave the bike through, you have one to three other drivers who may not know what’s going on. They see that you’re not going and maybe you’re letting them go out of turn instead. The person on the bike may assume the other drivers know your intent. Now you have a cyclist and a driver proceeding into the intersection, each one thinking they’re okay. So when a bike pulls up to the four-way, let them go when it’s their turn.

Cyclists: When you come to a four-way stop, stop. I recently volunteered to do a bike and pedestrian count and watched a cyclist hit the four-way stop I was at and zip right through with barely a glance at the cars that were about to cross in front of him. Also, getting onto the sidewalk may get you what I refer to as pedestrian status, but you still have the same obligation as a pedestrian in that you can’t just dart out in front traffic. If you’re going for pedestrian status then get off your bike and walk through the crosswalk. Otherwise, stop at the sign and go when it’s your turn.

Drivers: When you’re on an arterial and you see a bicycle stopped at a crossing intersection, please don’t stop and wave them across. You may think you’re being nice, but you are creating a potentially dangerous situation. More so if it’s a four lane arterial. You have drivers behind you and in oncoming lanes who may not know what you’re doing. For all they know your turn signal is broken, and you’re waiting to turn. And if the person on the bike isn’t paying attention, you could be sending them out into oncoming traffic.

Cyclists. If you’re waiting to cross the road and a vehicle driver stops and waves you across, shake your head “no” and wave them on. Just because they stop doesn’t mean the other three lanes are safe. You will get your opening to cross just like any vehicle driver would.

Drivers: You know those intersections that have the cement medians dividing your lane from the left turn lane and driving lane going in the direction opposite you’re headed? The width of the road has not changed but now there are three lanes where there are usually two. It’s kind of a choke point for vehicles and bikes together and passing a bike here is dangerous. Waiting five to ten seconds to get through may seem like a very long time, but it’s a small sacrifice compared to bumping up next to a vulnerable person on a bike.

Cyclists: I approach this situation in one of two ways. Sometimes I pull over and let the cars go by before I enter this chokepoint. Sometimes I don’t. When I don’t then I take the lane. Riding next to the curb can encourage a driver to squeeze by and endanger you. Taking the lane makes it clear they do not have room to pass. A half block later the road is back to normal and vehicles have room to get by.

Drivers: We all know to stop at red lights. I can only conjecture as to why this happened, but three times this year I had the green light and a vehicle blasted across through the red. Fortunately, I was not in the intersection. But that’s why I look both ways even when I have the green light.

Cyclists: All too often I see one of you treating a red light as though it doesn’t apply to you. Stop. First of all, for your safety. Secondly, you’re giving drivers more reason to complain about bikes not following the rules of the road. While I agree it’s not fair to generalize about cyclists just because of the actions of a few, it’s been my experience that the percentage of red light runners is higher among bikes than vehicles. Do I ever go through a red light? Yes, I do. First, I stop. If it’s a timed light then I wait. But if there’s a sensor and it doesn’t detect me and there are no cars to help me out then I go through the light once there is no cross traffic. Otherwise, I wait or push the pedestrian crossing button.

Cyclists, let me close with this. Wear clothing and use lights so you can be seen. And yet assume drivers don’t see you. I’ve avoided many close calls over the years because I expected drivers to not see me. Most drivers are looking for other vehicles. (Been there, done that.) So draw attention to you and your bike.

But not by running red lights and stop signs.