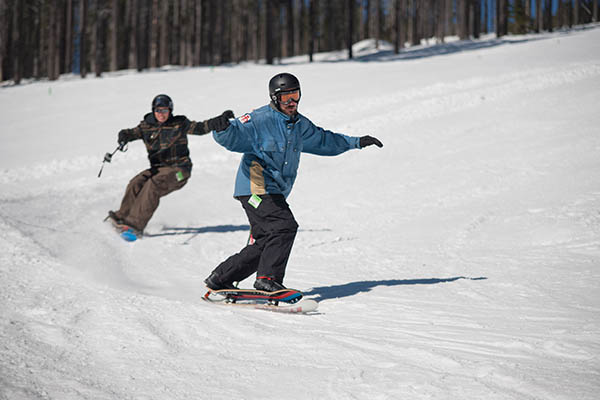 The history and invention of snowskates are deeply rooted in the Inland Northwest. Many believe that a Stevens Pass local named Steve Frink came up with the concept for bideck snowskates in 1994. He was a skateboarder and his design was the closest thing you can get to skateboarding on snow.

For those unfamiliar with what a bideck snowskate is—probably most of us—it is simply a skateboard deck mounted onto a lower ski deck that is usually grooved to glide easily on snow. The most significant feature is that it doesn’t have bindings, a detail that has caused some issues at ski hills over the years. Today, though, the primary U.S. manufacturers, Ambition Snowskates, Icon Snowskates, and Premier Snowskates, also make leashes, which satisfy gear requirements for most resorts. 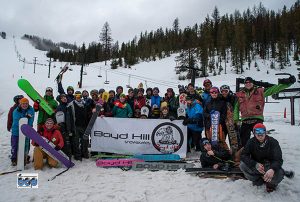 Here in the Inland Northwest, we have our very own snowskate company, Boyd Hill Snowskates. About eight years ago, owner Bryce Rich teamed up with TJ Sneva of Sneva MFG to make “big mountain snowskates that you can ride in the powder and at ski resorts—adult-sized stuff,” says Rich. Unlike the other builders at the time, they also offered all the components separately: grip tape, struts, skate beds, leashes. “We sell either all complete or the pieces people need to build a skate.”

It’s safe to say that snowskating is a niche sport, even if Burton did release the limited “snowdeck” back in the early 2000s. It almost died out then, but somehow it has stuck around and is now making a comeback, says Rich. “The sport is full of 40-year-old skateboarders who are tired of snowboarding.” Rich and other snowskate fans are working closely with local ski resorts to bring awareness and opportunity to Eastern Washington and North Idaho—and maybe some young people to carry on the sport to a new generation. //