Ski Bum Advice: 4 People You Might Meet in a Lodge Bar 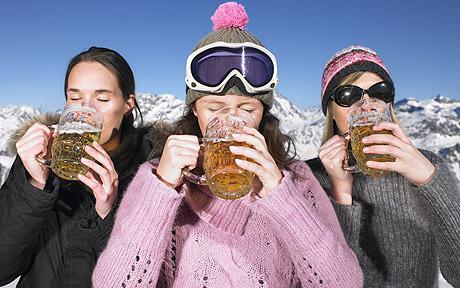 There are three things that I really love about skiing. The first is taking my boots off. The second is taking my boots off. The third is enjoying some adult beverages with friends in the lodge bar. Over the years, I will admit that I have frequented more than a few of the region’s alpine watering holes and have noticed something very interesting in all of them. The types of people that roll into the bar are the same, no matter where you go. If you want to have some fun people watching, keep your eye out for the following characters.

The Poser
Hard not to notice this guy, since he (it’s always a guy) just strutted in wearing the most obnoxious outfit imaginable. Dude, lime green pants and a white jacket might have looked good in that GQ article about Vail, but not here. Hair perfectly styled with gel residue evident. No scuff marks on boots or helmet, price tags still attached to both. Usually orders expensive scotch or bourbon and brags about how he “shredded” tons of untracked powder that morning. It hasn’t snowed in 3 weeks.

The Barfly
You will hear her before you see her due to her unmistakable and highly annoying laugh. Think nails on a chalkboard or that girl from that one show. Usually drinks Lemon Drops, Long Island Iced Teas, or whatever the guy next to her is buying. Talks loud enough to be heard across the room, with frequent use of such phrases as, “Oh My Gawd, Really?”, “Me Too!”, and “Sure, I’d Love Another One!”  Can be found sitting next to The Poser at the bar or bumming smokes from some poor guy outside. No one has seen her make a turn since 1994.

The Drinker
If liquid courage actually worked on the mountain, this dude would be the Audie Murphy of skiing. (If you get this reference, your history teacher thanks you). Can be found shaking the bar entrance gate at 9:05 a.m. shouting “You guys open?”  Frequently incoherent by noon, thanks to multiple shots of Jagermeister. Falls down easily in the lift line. Ski Patrol knows him by his first name as they have found him more than a few times upside down in a tree well with his pants around his ankles.

The Local
You won’t see this guy or gal until the end of the day, though you caught a fleeting glimpse of them earlier as they exited that one tree run that you have always wondered about. Typically occupy a back corner table, and micro brews materialize with only a head nod to the bartender. Boots may be adorned with mismatched buckles and duct tape. Goggle tan is very apparent, and it’s only November. Deep down, you want to be like them.

Brad Northrup spent nearly a decade working in the ski industry. He is currently confined to a cubicle 40 hours a week. It’s for his own good.