Craters of the Moon National Monument and Preserve is a geologist’s dream, and an ideal location to explore during the fall and spring months. The variety of lava formations in one place seems unmatched anywhere else in the world. There are lava tubes that you can hike through, like Indian Tunnel, where you can see the impressive width of the lava flows that created this harsh, intricately sculpted landscape.

Located 175 miles east of Boise, Craters of the Moon has some of the best examples of open rift cracks in the world. You can also find examples of vents, fissures, lava bombs, tree molds (the imprint of trees incinerated by lava), cinder cones, and spatter cones. One spatter cone, aptly named the Snow Cone, holds snow that is visible from the top of the cone even on 100-degree days. The three lava fields that make up the monument came from a series of cracks collectively known as the Great Rift, which is the deepest rift crack on Earth.

While summer temps can reach into the 100s, late September temps are downright pleasant. Average October temps are in the 60s, although if you are camping that late in the fall, be aware that nighttime temps can venture down into the 30s this time of year. Camping is available at the 51 first-come first-serve sites at the north end of the monument. This is some of the most unique camping I have ever experienced. Most sites are settled into nooks and plateaus on the lava rock and provide a surprising amount of privacy to commune with a landscape unlike any other. 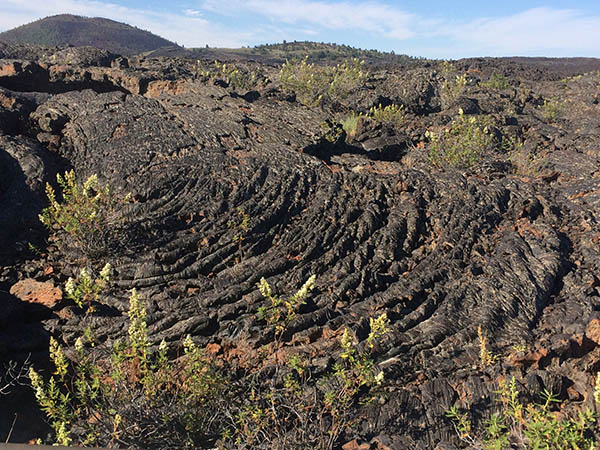 Only the north end of the monument is accessible by vehicle. There is a 7-mile loop drive that includes a huge variety of what the area has to offer: wildlife, wildflowers, lava formations, and caves.

Our favorite stop is the Caves Trail. If exploring the caves, which I highly recommend you do, bring a headlamp and a sweatshirt. Before you go you’ll need to fill out a free cave permit at the visitor’s center. There are a variety of caves, all of which are worth exploring and accessible, even for younger visitors; my kids crawled through four of them with our help and supervision at ages 11 and 6.

Indian Tunnel is the largest and most accessible. It started its life as a lava tube, but several cave-ins have given it a much more open feeling. It is the best way to witness the volcanic forces that sculpted this area. Dewdrop Cave is wide and open, providing the perfect stop for those new to rock scrambling and cave exploring. The entrance to Boy Scout Cave is a tighter squeeze but opens up once you are inside, and really gives the feeling of cave exploring. It was surreal to find that this cave harbors icicles year-round.

Craters of the Moon has some exceptional stargazing. In the summer it’s hard to take advantage of the nighttime beauty because of the late sunsets, but fall offers the perfect time to sit up and watch the Milky Way extend its arms across the entire sky. In fact, it’s among only 39 sites in the United States to be named an International Dark Sky Park.

With only a small part of the monument open to vehicles, it’s easy to think this is not a prime hiking destination. That couldn’t be further from the truth. There are paved and unpaved trails within the monument, and more rugged hiking opportunities are available in the backcountry area. The eight shorter trails within the monument range from 0.05 to 1.8 miles in length. The one backcountry route is the Wilderness Trail, which follows part of the Great Rift and also brings you past cinder cones, fissures, and other volcanic features. Keep in mind all overnight backcountry hikes require registration with a ranger, and no drinking water is available in the backcountry.

There is an entrance fee of $15 per vehicle. The visitor’s center and loop drive are located 18 miles southwest of Arco, Idaho. //

Sites to See on the Way to Craters of the Moon

Crystal Atamian is a freelance writer and editor in Spokane. Her interest in geology goes back over 20 years when she took six different geology classes at UC Davis “just for fun.” Crystal wrote about installing solar panels on your home in the July issue.

[Feature photo: Lava tubes give an idea of the volume of lava that once ran through this area. // Crystal Atamian]