Rafting the Lochsa — an Inland NW Recreation Right of Passage

“We’re going to go to the house and have a Bloody Mary with the grim reaper. We fell off the cliffside because we tripped over our shoestrings, so we’ve gotta jump on Jonesy’s horsetail, ride the prelude through Lochsa Falls, pick up the pieces, smoke the pipe with the old man and get terminated at Split Creek.”

Not salivating at that seemingly nonsensical story? Then you haven’t floated the Lochsa River (pronounced “Lock-Saw”) in north-central Idaho, one of the premier one-day whitewater runs in the Inland Northwest – or anywhere else, for that matter.

The snowmelt months of spring bring world-class whitewater rafting to the Lochsa, the river ably living up to its name, which derives from the Salish for “rough water.” Many rivers leaven their big rapids with slack-water respite. Not the Lochsa, which boasts almost continuous rapids over the 40-mile stretch from its headwaters near Lolo Pass on the Idaho/Montana border to the confluence of the Selway, a world-class wilderness whitewater experience in its own right.

Forty named rapids – that introductory story should give some clues – on the standard Lochsa float run the gamut from standing waves and surf holes to raft-bashing cataracts through van-sized granite boulders. The notorious Lochsa Falls has spawned a cottage industry of GoPro-captured carnage, but its neighbors are not to be ignored; thread-the-needle class-IV rapids like Ten Pin and House Rock Rapid merit a raft-paddle high-five from successful boaters.

And if you can wipe the water from your eyes and tear your focus from the river, you’ll see the scenery is first class too. One of the six original rivers protected by the U.S. Congress in the 1968 Wild and Scenic Rivers Act, the free-flowing Lochsa flanks the Selway-Bitterroot Wilderness on river left, the river chatter drowning out the light traffic of two-lane Highway 12 on river right. Fog-catching canyons enhance the mystery of one of the most pristine landscapes in the lower 48, the river looking much the same as when Lewis and Clark, who encountered it on their westward journey to the Pacific, described it as “swift and stony.”

Guiding a raft down the Lochsa is for experienced boaters only, so it’s best to sign up for a trip with a commercial outfitter. ROW Adventures recommends the trip for boaters with a float or two under their belts, but later in the season, lower flows make the Lochsa a first-timer-friendly float, with bail-out points along Highway 12 in case anyone gets cold feet. I went along on a trip with ROW last season, and the guides were the right combination of laid back and laser-focused, able to crack jokes in one breath and bark out commands in the next. And they’re good cooks too. Their hot beachside lunches take the edge off chilly spring temperatures. And if you’re lucky, the guides will even tell you a little story about the Grim Reaper and the Terminator, an explosive narrative that unfolds over a swift, stony landscape. 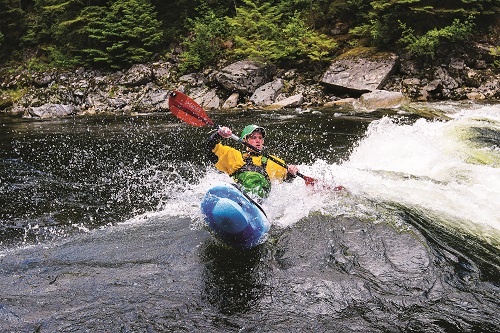 The Lochsa River is a world-class whitewater mecca with thrilling class III and IV rapids. Guided rafting trips are suitable for most healthy adults and older children and teenagers.

When to Go: The whitewater season on the Lochsa normally runs from May through early July, although this year, with less snow left in the mountains to drive spring river flows, the whitewater fun will start in April and end earlier than usual.

Guides: We recommend these experienced Lochsa River guides. ROW Adventures runs trips out of the River Dance Lodge out of Syringa, Idaho, 90 miles east of Lewiston; Three Rivers Resort and Rafting operates at the confluence of the Lochsa and Selway Rivers, which come together to form the Clearwater River at the tiny town of Lowell; and Lewis and Clark Trail Adventures further upriver runs its Lochsa trips out of the Lochsa Lodge near Lolo Pass and the Idaho/Montana border.

Lodging: Several lodges and campgrounds along the river corridor give you plenty of options to choose from, ranging from tent camping, rental cabins and comfy lodge rooms with hot tubs. The River Dance Lodge in Syringa offers handcrafted log cabins with private hot tubs and dining at the Syringa Café. Three Rivers Resort operates a campground and rental cabins and has a heated pool and hot tubs, restaurant, bar and store. The Lochsa Lodge near Lolo Pass has lodge rooms, cabins, a restaurant and bar and a store.

Staying Warm on the River: You don’t have to freeze your butt off on a Lochsa trip. Outfitters provide plenty of amenities to keep you warm, including thick wetsuits, splash jackets, booties, gloves, and other warm clothing and creative comforts like on-river hot lunches, heated vans, and post-trip hot springs, hot tubs, or hot showers. //