Pettet Endurance Project — Made in America Running Apparel with Soul 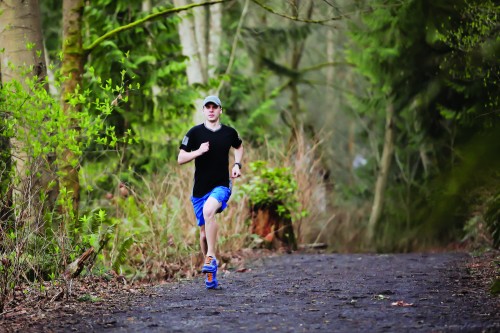 Running shirts tell stories – ask anyone wearing a Bloomsday finisher t-shirt. Shirts made by Pettet Endurance Project also tell a story. PEP designs and sells merino-wool running shirts that are exclusively made in the USA. Based in Bothell, Wash., north of Seattle, this start-up company officially launched in May 2014 at the Bloomsday trade show, after two years of planning and production. Co-founded by Greg Poffenroth – who graduated from North Central High School (2002) and Gonzaga University (2006) – and his wife, Lisa (also a GU grad), this savvy and personable e-commerce business is steadily growing and getting national attention.

“We’re working really hard at building a company that has soul,” says Poffenroth, who notes that they want their brand to convey the socially conscious ethos of the Pacific Northwest. “We want our customers to be proud to work with us, and have products that we’re proud of making,” adds Poffenroth, whose father Don is a co-founder of Dry Fly Distillery in Spokane and an influential business mentor.

Greg Poffenroth, 31, grew up living a half-mile from Pettet Drive in northwest Spokane, otherwise known as “Doomsday Hill,” along the Bloomsday 12k race course. Every year, this was where he watched the elite racers.

“I wanted to name our company something that was personally meaningful to both me and the running community,” says Poffenroth, who started running after college and recognized a lack of innovation in the athletic apparel industry.

“I didn’t want to name it something running-specific, [because] I may go out running one day and be out on my road bike the next day. I view these things as a project – whether you’re running six-minute miles or twelve-minute miles, it’s always something you’re working on. The company has to have that same mentality and philosophy – we have to get better every day. By showing through our name, it forces us to live that mentality day in and day out.”

PEP apparel is made using high-quality 100% merino wool from Australia and New Zeeland, obtained from ethical sources that use environmentally-friendly practices. With natural anti-microbial and thermo-regulation properties, in addition to other benefits of merino wool, PEP shirts are designed with endurance athletes in mind. A trim fit and longer sleeves meet the needs of trail runners and ultra-runners. “They work just as well for hikers, backpackers and general outdoorsy people,” says Poffenroth, who foresees his company extending into apparel for cyclists and triathletes.

PEP’s production team includes a designer, who was a former director of design for North Face; a pattern maker, formerly with Nike, who does all of PEP’s technical design work; and a producer, who oversees quality controls and production schedules with the factories. All three work under contract, according to Poffenroth.

American factories, skilled in producing highly-specialized clothing – including ones in Spokane and the Tri-Cities, as well as Oregon and California – manufacture PEP’s apparel. “It costs four or five times as much to produce our products in the U.S. [But our] product, in the end, is less expensive than our competitors,” he says. PEP apparel costs less because it’s only sold online through the company’s website, pettetendurance.com, or in-person at race trade shows. Free shipping is always provided, even for returns. “I’d rather make a high-quality product in an ethical manner and sell it for what it’s worth,” he says.

“We add a handwritten note with every order – to thank [customers] and ask for their feedback. This is one of the ways we’re different. And as a result, we get a lot of positive feedback on our products and our prototypes,” he says. With sales and production runs increasing, PEP has developed heavier-weight prototypes for shorts, hats and jackets. And new spring items are coming soon.

“We’ve beat growth projections, but with a start-up I didn’t want to burden the business with having extra costs with my own salary,” says Poffenroth, who continues to work full-time as a business consultant while overseeing his own. “My wife and I are boot-strapping this company – it’s our own investments that are making this work. We’re working hard to grow organically and profitably. By not taking outside investments, we can control our company’s direction and not be driven solely by profit. Our concept has been met with a lot of success. We get notes from our customers, whether it’s an email or handwritten, thanking us for building our company like this.”