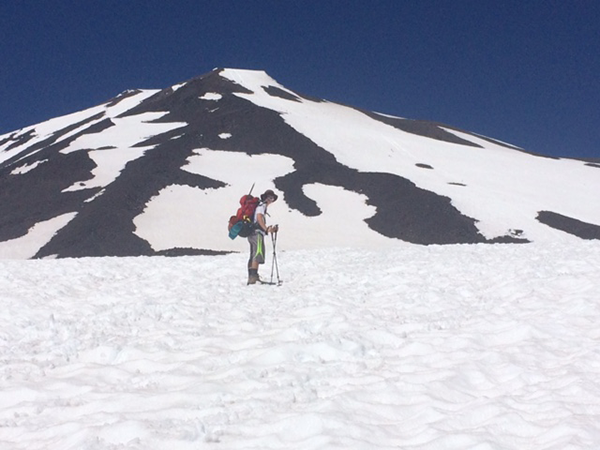 As the school year came to a close, my family and I were sitting around the dinner table discussing plans for the summer. Hanging out at the lake, a trip to Seattle, and our annual pilgrimage to Silverwood were all planned out. Out of the blue, my better half said, “You boys should go do something manly.”  I swear there was a twinkle in her eye when she said it. Jacob, our then-14-year-old, was entering high school that fall and really enjoyed the outdoors. Which got me thinking. “The South Climb on Mount Adams,” I said.

Prior to becoming domesticated, I had spent a good chunk of my adult life climbing the great volcanoes and icy peaks of the North Cascades and Canadian Rockies, and Mount Adams was one of my favorites. The South Climb is a relatively “easy” climb by mountaineering standards but is a great first big mountain for the aspiring climber. While the route is non-technical, getting to the 12,200 foot summit requires endurance and will power. Jacob had just finished track and was in far better condition than me. I hadn’t climbed anything in a few years, unless you count the stairs that led up from the fridge in our basement. Even then I was sucking wind.

And so it came to pass that on a clear and sunny day in July, Jacob and I found ourselves at the South Climb trailhead, ready to assault the hulking mass of Mount Adams. For three hours we trudged our way up the rocky trail towards the high camp, taking breaks every hour or so to eat and drink. We chatted about cars, music, and how good dinner was going to taste later that night. We spent the last hour on an endless, expansive snowfield that seemed to go on forever. Few words passed between us as our destination for the evening came into view.

Once we rolled into the high camp at what is known as the Lunch Counter, Jacob was tasked with setting up the tent, while I located water and bagged up snow to melt. We spent the remainder of the afternoon lounging in the sun, taking photos, and throwing rocks at other rocks – all of the stuff climbers do to pass the time. As the sun began to set, the sky turned an amazing orange hue, thanks in part to the numerous wildfires burning across the state. Snug in our tent and with bellies full, sleep came quickly.

We awoke at dawn, ate a quick bite, and stepped onto the frozen snowfield. Jacob adjusted his crampons and donned his ice axe. “What do you think your buddies are doing this morning?” I asked. He looked, smiled, and said, “Definitely not something this cool.”

We zigzagged our way up the steep headwall towards the false summit. Jacob seemed unfazed by the altitude and was a machine. Your humble narrator, however, took a more “slow and steady” pace some distance back. After a quick break at the false summit, we traversed the ice cap and began the final push up the summit pyramid. Less than an hour later, we were on top. After some high fives and the all-important hero summit photos, we sat down. “I have two things to tell you, bud.” I said. “First, no matter what you do for the rest of your life, you get to keep this. You earned this summit. No one can ever take this away from you.” “What’s the second?” he asked. “The summit is only halfway. We still have to get down.” I said.

Descending Mount Adams is the best part, because you can glissade from the false summit at 11,200’ down to the Lunch Counter at 9500’ in a matter of minutes. No matter how many times I have climbed Adams, my face hurts every time from laughing as I fly down the glissade chutes. After reaching the Lunch Counter, we packed up and made our way down the rocky trail to the parking lot. I had warned Jacob that the longest mile is always the last, and this definitely proved to be true. With temperatures in the 90s and our packs feeling heavier by the minute, we both were ready for the trip to end. Just when I thought Jacob was about to reach the end of his rope, the glint of cars came into view. As we made our way back home, I asked him what he thought about the trip. “Some things were easier than I thought, and some things were way harder,” he said. “But I would definitely do it again.”

I smiled, nodded my head, and said nothing. The torch had been passed. //

Brad Northrup is an avid skier, fly-fisherman, and mountain climber.